Daily walks are a fact of life following our recent trip to Japan—I never want to be so out  of shape in another country again. To keep it fairly mudless, I decided to walk sections of Ke Ala Hele Makalae (The Path that Goes by the Coast) from Kapa‘a to Kealia to Paliku Beach, also known as Donkeys Beach. The one-way distance from Kapa‘a Community Center to the north end of the path is about 3.4 miles, and Kealia Beach is a nice midway turnaround.

So, over the past month I’ve walked at least one hour each day at 3–3.5 mph (5–5.5 kmh) while observing tide changes as well as familiar and unfamiliar scenery along the way. When conditions are just perfect following a good rain one can see Wai‘ale‘ale and Makaleha Falls from the north end of town; on days like this, you just know that they’re out there.

Just over that hedge is the north end of the Kauai Products Fair, a kitschy little tourist trap. The path overlays the roadbed of the former Ahukini Terminal & Railway company right of way, and thus features many of the elements one might expect to see on a train ride. Below is a shot taken within the cut at the summit between Kapa’a town and Kealia. I took this shot not only to reveal the striations in the soil but the various wildflowers growing along the top and left face of the cut. The fence in the foreground is to catch falling rocks—a recurrent hazard along the path.

Just beyond the crest, the landscape and flora change rapidly. Here, overlooking the mouth of Kapa‘a Stream are plants that look like they were plucked from the Sonoran Desert. They are growing out of inhospitable rocks, but as the soil improves downslope, they give way to the usual and customary specimens.

One morning I was fortunate enough to glimpse Makaleha Falls, looking west at the intersection of Mailihuna Rd and Kuhio Highway (56) near the mouth of Kapa‘a Stream. That photo bomber at left center was a Nene, the indigenous goose, I believe.

Typically, at low tide the scene from the north end of the bridge, looking south, resembles the one at left. For the first time since we moved here I caught the windless shot at right. The old railroad cut is evident in the background and clearly illustrates the effect of the prevailing wind on plants along the coast. 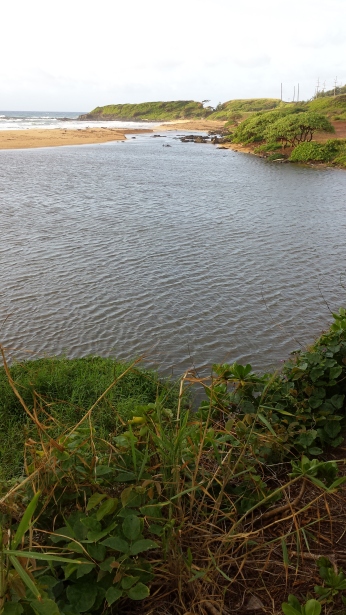 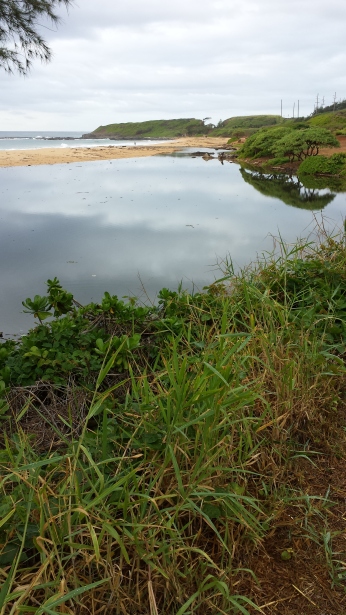 I often park at Kealia Beach because it expands my options for going north or south, or a little of both if it suits me, and that variety helps keep the walks interesting. Other days, I walk up from the house, and down Mailihuna Rd and cross Kuhio Highway at the north end of Kealia Beach, then head back to town, and home via Kawaihau Rd. Below, the Kealia Lifeguard Station, as seen through the windshield from the parking lot.

Proceeding north out of Kealia, both wind and ocean, deafening at times, are constant companions.This shot was taken about halfway between Kealia and the Pineapple Dump.

Next stop: the Pineapple Dump. Once upon a time, the sugar trains were idled only on Sundays, and an engine and side dump cars were made available to the cannery at Kapa‘a. Pineapple tops were hauled out onto the little pier, tipped and emptied into the ocean to be carried far away. Sometimes the tides and wind were not so favorable and the tailings were slammed back into town along the beach, and the smell was… awful, so I’m told.

Looking back on the Pineapple Dump, and on the way to Donkeys Beach. Again, the direction of the prevailing winds is easily distinguished by the habit of the trees and shrubs hugging the coast.

Stopping to study another planet, or so it seems from the random distribution of stones on all but lifeless red dirt.

Further along, I encountered what looks like a nursery for table rocks. Yes, if you have a state or national park and are seeking table rocks for your collection, this may be where they’re born and raised.

“Reindeer Slug,” the first thing that came to mind when I looked up and saw this old snag lying on the ground. We do have some pretty big slugs and snails here.

Even weeds are special here. I cannot identify them all, but enjoy them nonetheless. Three or four varieties of morning glories thrive on and off the path, some low ground cover that looks rather more glacial than tropical, and here and there so hardy bright yellow flowers. 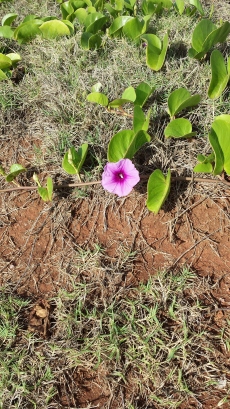 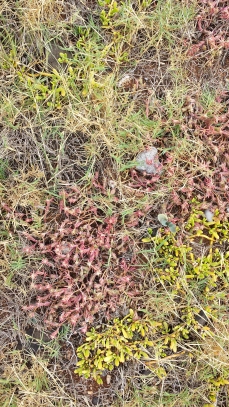 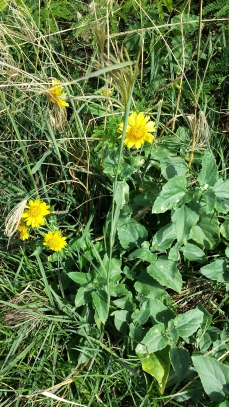 There you have it then, 3.4 miles in what, 20 minutes? You’re fast! There are many more plants, people, and other animals to see along the path, but my objective was to cover a considerable distance as quickly as possible, exercise that is, so whether you live here, or you’re just visiting, take a hike; have a look.

Ready for fall!
Our daughter-in-law brought us tomorrow’s breakfast: rainbow sprinkles, campfire s’mores, and maple bacon doughnuts (the sprinkles went home with K). Thank you, M!
Finally!
Shaking my head . . . mangoes were a luxury item on Kaua’i unless you had a tree in your yard. They were $5 for ONE at the farmers’ market there (and they weren’t organic)!
Today’s Fabulous Friday treat was brought to you by Crumbl. She chose a Minion Sprinkle cookie.
We stopped by a nearby aerated pond on our hike today
Join 1,098 other followers