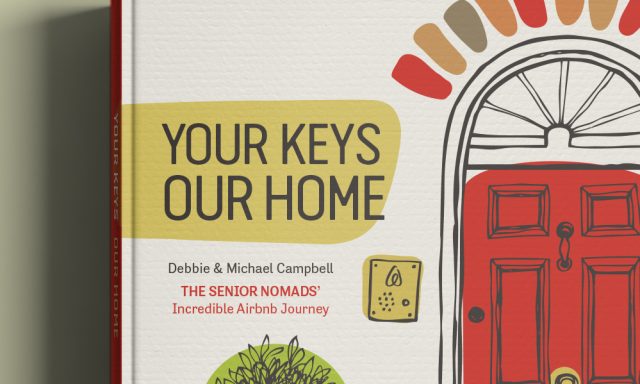 Back in 2013, Seattle residents Debbie and Michael Campbell were ready to retire, but Debbie felt they had one more ‘big adventure’ left in them before they settled down. After hearing about Airbnb from their daughter they decided they could travel around Europe while staying in Airbnb rentals to keep it affordable. They sold almost all of their possessions (including their cars and beloved sailboat), rented their house, packed their bags and in July 2013 they hit the road.

Four years later, the Campbells, AKA the Senior Nomads, are still traveling. In the past four years they’ve visited more than 60 different countries, over 200 cities, and stayed in over 130 Airbnb rentals. They’ve been featured in the New York Times, the Huffington Post and other publications and interviewed on Rick Steves’ radio program. Most importantly, they’ve made friends all over the world.

Somewhere along the way they connected with the staff at Airbnb, shared their experiences, and were eventually invited to speak at the Airbnb Open in Paris in December 2015. Following that they were encouraged to write a book about their experiences, primarily for Airbnb hosts all over the world, but for others interested in a different way of traveling as well, and Your Keys Our Home: The Senior Nomads’ Incredible Airbnb Journey was the result.

The book is an easy and very enjoyable read – I couldn’t put it down, and ended up reading it all in one sitting. Debbie and Michael tell about how their adventure got started; their evolution as Airbnb guests, including how they choose their Airbnb rentals and get themselves to each destination. They include lots of good advice on how to search for and nail down an Airbnb rental that will be a great fit for one’s budget and with the desired amenities, as well as tips on how to be a great host and a great guest. They describe how much they pack (not a lot – they each carry one large rolling duffel and a backpack), their rules for staying within weight regulations, and who handles what as they travel. Woven through the book are fun and interesting stories from their travels.

After four years of traveling together, the Campbell’s are still in love and still enjoying each other’s company. For now, they have no idea when they’ll stop – in 2016 they sold their house in Seattle and became true nomads.

On one level, Debbie and Michael’s wonderful little book shows how it’s possible to affordably travel the world by staying in other people’s homes as if they were your own. But, the book is also an inspiring guide for re-imagining retirement. Whether you have dreamed of paring down possessions to the essentials and getting out to see more of the world, or just finding a more affordable and interesting way to travel, Your Keys Our Home is a terrific starting point for creating your own “big adventure.”

(Debbie and Michael have been blogging about their travels from the beginning of their adventure. You can follow along and learn more at their blog, The Senior Nomads. As of this writing they are in Amman, Jordan, following visits to Beirut, and before that, several locations in Africa.)

Out for lunch at Raices today - I tried their “Amor Amarillo” (love yellow) - chicken, beans, and cheese in a fresh, handmade tortilla with yellow mole sauce. The leaves grilled in the outside are pepper leaves and added a wonderful flavor!
Guacamole & chips with our wine this evening - yum! I have yet to get anything less than perfect 🥑 🥑🥑 here.
Flowers from my sweet husband after a not so good week.
Looking for olives? There’s almost an entire aisle of them at City Market plus a large selection of fresh ones at the charcuterie island. We’re still trying to come up with something City Market DOESN’T carry. It’s seriously the most amazing supermarket I’ve ever shopped at.
Father’s Day at Mario’s Mariscos. Brett ordered crab with garlic butter and got enough to feed a family!
Today’s shopping finds. The woman running the shop where I found the blouse did the embroidery!