This is just a jumble of images from our life on Kauai, a glimpse or two of random beauty.

Waterfalls are among our favorite sites to see, and this little gem meets the sea just north of Donkey Beach at ’Āhihi Point. It’s only an intermittent trickle (tickle in Newfoundland), which sometimes runs dry in summer, but the sight and sound is especially soothing on warmer days.

Looking west across Kuhio Highway (56) from the top of the tree-tunnel pathway down to Donkey Beach provides a spectacular view of Kauai’s major water supply: cloud-capped mountains. Wai’ale’ale Ridge, in the background, features the two tallest peaks on Kauai: Kawaikini at 5,243 feet (1,598m); Wai’ale’ale at 5,148 feet (1,569m). Makaleha Ridge, in the foreground, is surrounded by peaks  averaging half that elevation and the highest point visible in this photo is Pōhaku Pili at only 2,477 feet (755m).

Closer to home, the skies offer spectacular shows like banshees, and dragons, and zephyrs, oh my! Some of the most unbelievable sights really can be found right in your backyard. 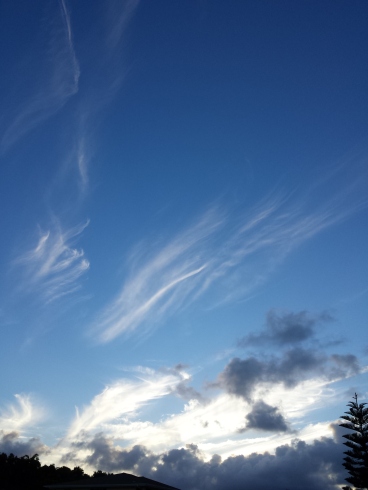 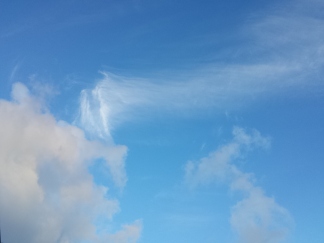 Returning to earth we find various expressions of what we are made of—calciferous rock, sand & ash, and Kauai’s infamous red dirt. (See also, Arizona to Georgia)

Driftwood abounds at inlets, sometimes appearing as fanciful creatures, at other times simply a cache of “drift kindling.”

After living here for nearly four years, I finally pulled off Kuamo‘o Road to visit the Royal Birthstone, Pōhaku Ho‘ohanau, where all of Kauai’s Ali‘i (Chiefs) were once born. Then again, I had always wondered where those stairs at the back went, and presumed that they led to a viewing platform. 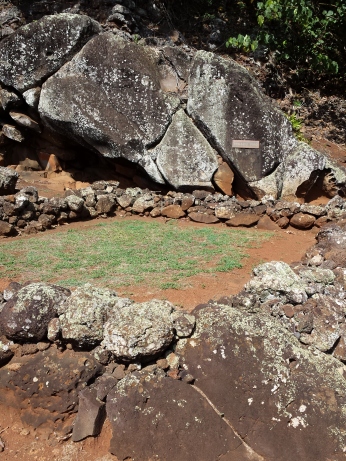 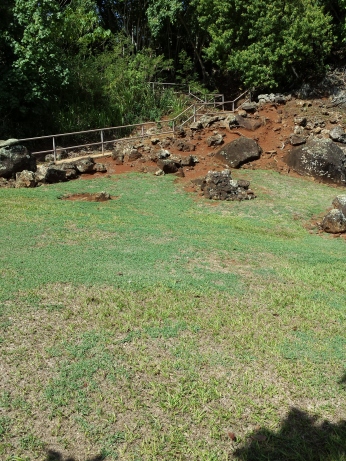 But oh no, they lead to a Japanese cemetery, which is visited often by descendants and loved ones. That is, there were fresh flower arrangements, toys, and food for hungry ghosts throughout. 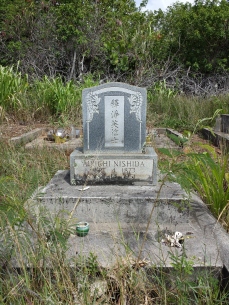 On Monday, during my morning hike, I took a picture of a treacherous point along the old right-of-way that may be added to the Eastside Trail for completion to Anahola. Suffice it to say “road narrows”, and it’s been doing so quickly the past couple of years. A stream passes through a narrow culvert under what’s left of the fill and empties into Kuna Bay.

Speaking of the Eastside Trail, Ke Ala Hele Makalae (The Path that Goes by the Coast), future development to the south may transit this 165-foot (50m) bridge of the former Ahukini Terminal & Railway Company along the way to Ninini Point and Nawiliwili Bay.

Naturally, the coast speaks up in winter by way of weather advisories and warnings. It’s violence is fascinating when viewed from shore; not so much viewed from a small boat.

Thus ends another week in paradise.

9 thoughts on “Wanna See the Sights?”