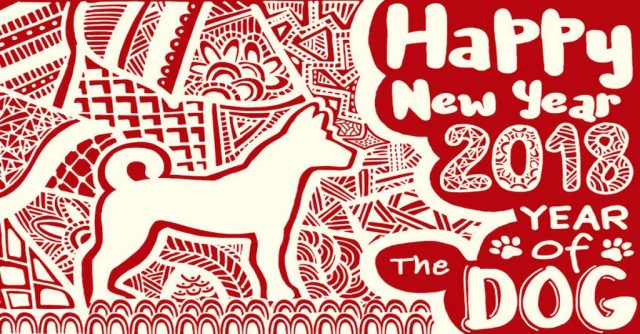 2018 is the Year of the Dog, the 11th of the 12 Chinese zodiac animals. Dogs are loyal, friendly, and kind, and people born in dog years are said to share those traits as well as being honest, easygoing, and helpful to others. Rather than seeking money and power they are more likely to try to make the world a better place. However, people born in a dog year can also be critical, stubborn, and cold at times. They can have trouble communicating and possibly become pessimistic. The strength or absence of these personality traits will depend on the lunar month of the year in which someone is born.

Lucky numbers for those born in a dog year are 3, 4, and 9, and unlucky numbers are 1, 6, and 7. Lucky colors are red, green, and purple, while blue, white, and gold are considered unlucky. Dogs are traditionally compatible with people born in a rabbit year, but not with those born in dragon, goat, or rooster years.

Unfortunately, this year is predicted to be an unlucky one for people born in a dog year because contrary to what you might think, the years that share your birth sign are thought to bring bad luck! If you were born in a dog year it’s recommended that you do everything you can to try to stay calm as well as relaxed as possible throughout the year. One superstition says you can hold off bad luck by wearing red underpants every day!

Industrial projects and developments in energy are predicted to be successful in 2018, while projects or undertakings based on greed will be rejected or fail. Family relationships will be especially important during the year. It’s also a good year to make lifestyle changes but you may also experience short periods of loneliness or sadness. This year has the potential to be one of hope, with differing cultures working to achieve solidarity and rejecting indifference.

Chinese Lunar New Year celebrations go on for over two weeks. I was in China for the end of the Lunar New Year in 1999, in Changsha, Hunan Province. I was staying in a big, fancy high-rise hotel with a friend, and had just met and adopted WenYu the day before (Brett had stayed home with Meiling). When the fireworks started, to signal the end of the New Year’s celebrations, we thought war had been declared and the hotel was being shelled. The noise was deafening, literally earth-shaking, and one of the most frightening experiences of my life!

4 thoughts on “Kung Hei Fat Choi! Welcome the Year of the Dog!”

Slow traveling the world with a sense of adventure!

No cherry blossoms yet, plum trees are just getting started, but camellias are in full bloom!
Getting ready for cherry blossom season with Starbucks sakura drinks!
This ball of cedar twigs, called a sugidama or sakebayashi, indicates sake is available for sale in this shop. In the past, if the twigs were green and fresh it meant that fresh sake production was on its way or aging, but if the twigs were dry the sake was ready to drink. These day sugidamas are most likely found outside higher end sake sellers or restaurants offering large selections of sake.