17,739 steps, or 6.7 miles, is the distance my phone said I walked this past Tuesday (which means I probably walked far more because my phone has always undercounted the number of steps and distance when I walk).

One of the things Brett and I very much wanted to see in Buenos Aires was some street art in the Palermo Soho neighborhood. Airbnb Experiences had a few affordable tours to choose from so we selected one that fit our budget and off we went on Tuesday morning, setting out from our apartment at 9:00 a.m.

The Palermo Soho neighborhood is far enough away that we decided we should take the subway, which meant our first stop of the day was the Recoleta Neighborhood Tourist Assistance booth to pick up cards as you can no longer pay cash for a ticket. The booth was just a few blocks away and easy to find, but from there it was almost a mile’s walk to the nearest subway station! We were able to stop at an ATM along the way though to withdraw some pesos because we wanted to eat pizza for lunch at a highly-rated and affordable restaurant near where the tour would be.

At the subway station we discovered we first had to pay 50 pesos each just to activate the card. After that we added pesos to the card to use for our trip, 50 pesos each. Mind you, we had no idea what was happening at the time, but a lovely woman visiting Buenos Aires from Columbia stepped up to help, speaking with the man in the station window and trying to explain what was going on. Between her limited English and my extremely limited Spanish we eventually figured it out, and 200 pesos ($5.15US) later we were ready to board the train to our destination.

Upon exiting the subway in Palermo, we found ourself with yet another walk of about a mile to the tour’s starting point! The weather was lovely though and beginning to warm up, to the point we had to stop along the way for a bottle of water as we found ourselves becoming a bit parched. The neighborhood was interesting but also a bit “rougher” than the Recoleta neighborhood, or other parts of the Palermo neighborhood we had visited. We arrived at our destination tired but on time at 10:30 a.m. and set off on our tour.

Our tour guide, Florencia, was an absolute delight. She’s a professional photographer who also works with various artists in the city, and sets up installations or exhibitions beyond her own work. Along the way she offered several tips and tricks for getting better photos from our phones or cameras (a couple from Austria took the tour with us).

Palermo Soho, Florencia explained, was a former working class neighborhood that had been ‘discovered’ by artists because of the cheap rents there, and had grown into a vibrant arts center in the city, much like the Soho areas of other cities. The street art that has flourished in the neighborhood is not graffiti (although that exists, mainly in the form of tagging) but either works commissioned by the owners of houses or businesses where the artist is paid, or where the artist or artists has/have asked for and been given permission to create a work on a building or home and the art work is done for free. 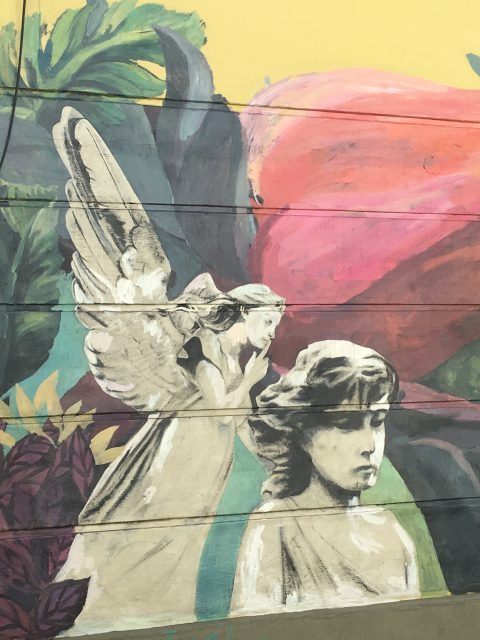 The art we viewed was varied, colorful and exciting, and as tired as I was becoming I could have gone on viewing it for hours more. I was especially thrilled by the artists’ use of color – all the artwork we saw was so vibrant and thought provoking. It was also fascinating to see how the artists had used various spaces in the neighborhood, from the front of a small house to an entire side of a building.

The tour did not end however with street art in Palermo Soho. We left the neighborhood and walked to the Botanical Gardens, which unfortunately was in the opposite direction of the restaurant where we had planned to have lunch. Sigh. After what seemed like a very long walk, about 30 minutes or more, we finally arrived at the Botanical Gardens, another stunning but calm space in the middle of bustling and busy Buenos Aires. The garden was designed by French architect and landscape designer Carlos Thays, and was dedicated in 1898. It covers over 17 acres, and contains eight separate geographical garden areas as well as five greenhouses and several sculptures and monuments. Some of the sculptures are copies of originals in Europe which were recreated by the original artists and sent to Buenos Aires for inclusion in the Botanical Gardens.

Following a leisurely walk through the cool, lush gardens Brett and I had to beg off one more garden visit as we were hungry and frankly more than a bit tired and needed to sit down for a while. Also, we were only a very few blocks from the Eva Perón museum which we both very much wanted to see and wanted to save our remaining energy for that. We said our good-byes to Florencia and headed to the museum, with a brief stop along the way for coffee and juice.

Eva Perón died the year I was born, but for some reason I feel like I have always known her story in spite of knowing very little else about Argentina. She is still a somewhat-revered figure here, so I was eagerly anticipating the visit to the museum to learn more about her and her life and accomplishments, and the museum did not disappoint. The displays and artifacts were fascinating, and the exhibits provided enough English translation to allow us to understand what we were looking at or viewing (there were several videos shown throughout the museum, all with English subtitles). Especially interesting to me were the many of Evita’s outfits on display which also often included the accompanying shoes, hats, gloves, etc. Seeing the photos of her and being able to look at the actual outfit she had been wearing brought a surprising depth to both the photos and the stories. Beyond her many accomplishments, Evita was an extremely vibrant, beautiful and stylish woman.

I have told Brett that if I ever again say at the end of a day like Tuesday, “I think it will be OK to walk back” he is to immediately stop and hail a taxi. Yes, for some crazy reason I decided it would be fine to walk back the two plus miles to our apartment through busy city streets after we had finished at the museum. To give a small idea of how exhausting that walk was, by the time we neared our street I could no longer focus my eyes! Our apartment is blessed with a jetted tub though, and after a long soak, a couple of Aleve and a big glass of wine I was feeling good enough to fix us a simple dinner of grilled ham and cheese sandwiches. We both slept soundly, and it appears I have finally gotten myself on somewhat of a normal sleep schedule again.

One of the joys of slow travel we are discovering is that we don’t feel like we have to go out every day and do something. Yesterday our only activities were a walk over to the ferry office to book our tickets for Sunday’s trip to Montevideo and to go out for a wonderful dinner at a nearby restaurant in the late evening. We’re not sure yet what we’re going to do today or even if we’re going to do anything. We may head over and walk through the old San Telmo neighborhood but we might also just stick closer to the apartment and do some more exploration in our neighborhood. Whatever we decide, we won’t be walking any six and a half miles again, that’s for sure. Tuesday’s exercise was really was too much for us, too soon. 10,000 steps a day is more than enough right now.