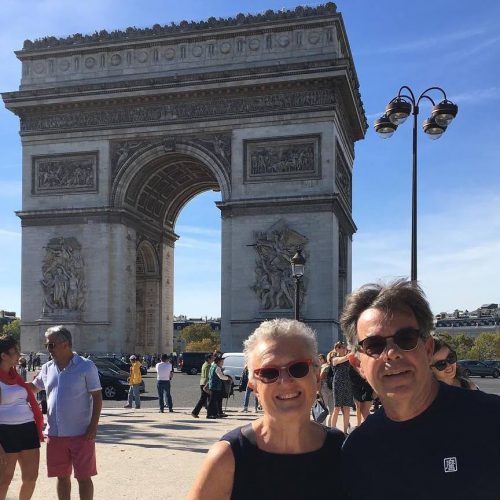 When we were making plans for our Big Adventure, Paris initially wasn’t even on our list of places to see in France because we felt we would be sucked into a complete tourist experience, and we believed it was also too expensive to stay for an extended period of time. However, we eventually figured that since we would be flying into Paris we might as well visit for a few days before heading off to explore other areas.

We realize now we did not schedule anywhere near enough time in Paris, and we of course ended up doing the whole tourist thing, visiting various “must-see” places around the city. It didn’t help that we lost almost two days of our time here thanks to the long (miserable) flight from Uruguay and jet lag. Although we arrived last Friday, we weren’t ready to get out and see anything until Sunday, when we scheduled what we thought would be two short walking tours of Notre-Dame and the Latin Quarter and the Marais neighborhood.

When we set out on Sunday we thought we had plenty of time to get to the tour meeting spot via the Metro. We have a Metro station just down the street but once there we had to go down eight long flights of stairs to get to the tracks, and I can’t do going down stairs quickly (we have since discovered the elevator). I told Brett I felt like I was descending into the 7th circle of Hell, and that the stairs would never end. Our train arrived shortly after we finally arrived at the track, but two stops later we ran into a problem: the station where we were to transfer was closed for repairs! So, we had to sit with our map for a while and recalculate a new route to get us to the Notre-Dame Cathedral (Cité Station). We eventually got to Cité, but saw no signs in the station directing us to Notre-Dame and we ended up coming out of the wrong exit, heading away from Notre-Dame versus toward it. By the time we got oriented and over to the cathedral we had missed our tour, but fortune stepped in for us: another tour was forming up and the guide warmly welcomed us to her group.

The temperature had been fairly moderate when we left our apartment, but by the time we got to Notre-Dame it had climbed to near 80° and we were overdressed, hot, and parched. The guide gave Brett time to run over and get a couple of bottles of water, and then off we went with the tour. We enjoy walking tours and learn a lot, but like the one in Buenos Aires, this tour also ended up being longer than advertised, and by the time we finished we knew there was no way we would survive the Marais tour later in the day. We had already walked over 11,000 steps and neither of us was interested in going through another 17,000+ step day in the heat. So, we said thank you and good-bye, and five transfers later on the Metro we were back in Montmartre (and of course we got to climb back up those eight flights of stairs in our station before arriving back at the apartment). After drinking a LOT of water, and of course some wine, we went out for dinner at an affordable Japanese restaurant down the road. It was still warm enough to sit out on the street and we enjoyed a very good meal!

Monday’s temperature was predicted to be 85º so we pulled some of our summer clothes back out of the suitcase, but decided to wait until later in the afternoon to set out, which turned out to be a very good choice. We did a little food shop in the morning, and stopped at a nearby boulangerie for a chicken sandwich to carry along with us for a late lunch/early dinner.

Our first stop of the day yesterday was the Arc de Triomphe. Paris, we were discovering, is one of those places that photos just cannot do justice. We were absolutely wowed by the Arc and stayed for a while to check it out. Afterwards we decided to stroll down the Champs Elysees. The street was wide and there was a nice breeze, but we sort of felt for a while like we were walking through the Ala Moana mall in Honolulu – the shops ran the gamut from Tiffany’s to Foot Locker with a McDonald’s thrown in for good measure.

We stopped at a park and ate our chicken sandwich while we rested for a bit, then climbed back on the Metro again at Franklin D. Roosevelt Station and rode over to check out the courtyard at the Louvre (there was no way we were going to deal with the hordes inside the museum). The temperature was starting to drop a bit so we spent an enjoyable time there, although we did stop at a Starbucks in the mall we had to pass through to get from the station to the courtyard – I got some iced tea and Brett ordered hot chocolate. I had promised myself that we were not going to go to a Starbucks while we were in Europe, but a hot day in Paris apparently had other ideas.

And then it was on to our last stop, the Eiffel Tower. We arrived at around 6:00, found a nice place in the park to sit and stretch our legs, and stayed until around 8:30, long enough to watch the sun set and the lights come on. What can I say other than c’était manifique! We did not stay for the full light show though – we had walked over 13,000 steps and nearly six miles at that point, and we were ready to get to our apartment and to bed.

This morning we woke up bright and early to meet up with a private guide for a tour of the Montmartre area. We set up this tour through a wonderful organization called Paris Greeters. The tour was completely free although we did make a donation of 20€ to the organization. Our guide, Jean-Claude, would accept nothing from us except for a glass of juice when we stopped to rest midway through the tour.

We knew Montmartre was full of hills, but until we walked the area we had no idea how many hills there actually were! There are also miles of old cobblestone roads, fascinating architecture, breathtaking views around almost every corner, art everywhere, and loads and loads of history. Besides the more famous sights in the area, such as the Basilica of Sacré-Cœur or the only vineyard left in Paris, Jean-Claude also showed us places we never would have found on our own, including a cul-de-sac of attached houses from around the time of WWI, and a very private (and expensive) small hotel with a drop-dead view of the city (instead of being upset when we showed up at the hotel, the staff was very generous and invited us in for a drink!). Although he lives in a suburb outside of Paris, Jean-Claude also seemed to know plenty of people in Montmartre, including a famous artist we met on the street (we had no idea who he was however). Below is a slideshow of a few of the things we saw this morning:

After three days with lots of walking, Brett and I decided to take this afternoon off to rest and re-pack our suitcases in preparation for Thursday morning’s early departure for Normandy. Plus, while it’s a little cooler than yesterday it’s also more humid, and it rained for a short while this afternoon. Tomorrow we may go visit the Pompidou Center or we might go look at the churches of Saint-Sulpice and/or Sainte-Chapelle – we haven’t made up our minds yet.

We know we’ve barely scratched the surface of all there is to see and experience in Paris. Neither of us can say we’ve fallen in love with the city; in fact, we both agree that we barely know it and want and need more time than we gave ourselves. We’ve had an absolutely wonderful time though, and know we’ll be back.

17 thoughts on “Two Americans in Paris”