Before coming to England and spending time in Blockley nothing said “English country village” to me more than a thatched cottage. While there appears to be none in our village, we did spot a few of these cottages as we passed through the village of Broad Campden on our way to Chipping Campden a few weeks ago, so when we finally got a break in the weather this past week we headed over to check them out.

Although it is possible to walk from Blockley to Broad Campden via the Heart of England Way, because of all the recent rain there had been (and the resulting mud) we chose to go over to the village by bus, and then take a shorter walk between the two Campdens, and catch the bus home from Chipping Campden. If we’ve learned nothing else in the past two weeks it’s that the weather can change quickly here – a sunny day can suddenly turn cloudy, cold and rainy in a matter of a few minutes, and vice versa and we did not want to get stuck if rain appeared again.

Broad Campden was an absolutely beautiful little village full of pretty homes and cottages, a small but lovely church, and a Quaker meeting house that’s been used since the mid-17th century. As my father and his family were/are Quakers, I was especially interested in seeing this place. Other than one pub, there are no other businesses in the village. We spent approximately an hour after we arrived walking through the village.

And yes, we did discover thatched cottages, several of them. All of them appeared to have been plucked from a storybook. 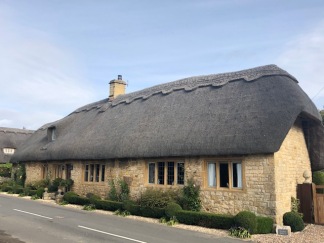 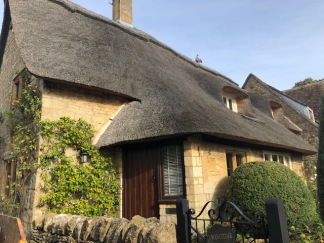 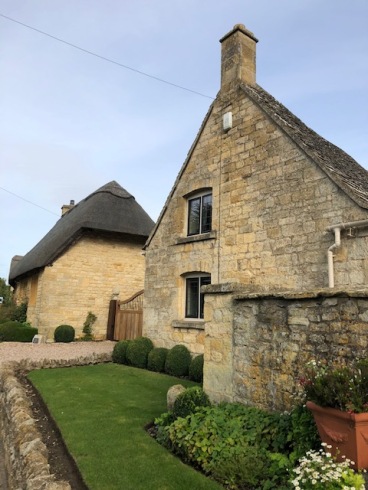 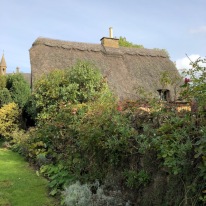 At noon we headed to Baker’s Arms pub for lunch. The pub has been operating since the 17th century and is one of the local pubs our host recommended we try. Brett ordered a tuna sandwich on whole-grain bread for his lunch, while I chose a traditional ploughman’s lunch, with ham, cheddar, beets, Branston pickle, pickled onions, salad, and bread. The lunch was once again huge, much more than I expected, and I did my best to finish as much as I could.

As we finished up our lunches we looked out the window and noticed that what was blue sky when we arrived was now dark, heavy, and clouded and the wind had picked up. We quickly settled our bill and set out for Chipping Campden, hoping we could make it before rain arrived.

As we started over the fields the clouds began to spit on us, and we were sure we were going to end up arriving in Chipping Campden soaked to the skin. But, the clouds blew past us and by the time we arrived in town the sun was back out again, ending what was a lovely outing on a high note.

11 thoughts on “In Search of Thatched Cottages”

YaYu wanted to spend her last day on the island at the beach and she wanted to swim . . . so we’re back at Salt Pond. Couldn’t have asked for a nicer day.
Massively BIG (and loud) rooster in our yard calling for its twin. I can’t remember seeing a bigger one on Kaua’i.
And yet another beach day! Today we’re at Salt Pond.
A second beach day in the same week? How did we get so lucky?
Beach day at Shipwreck!
Hau’oli Makahiki Hou! Wishing all a happy, prosperous, and healthy year . . . because we could sure use one after the last two!