I realize this post comes close on the heels of last week’s shopping post, but Brett and I have decided that just like when we were in England, Monday will be our regular weekly shopping day. We don’t have any school pick-ups to do on Mondays (our grandson has activities late into the afternoon) so it’s a good day for us to shop in the morning with time leftover to head out for something else later in the day.

After shopping at Seiyu in the morning and getting our stuff put away yesterday, we headed over to the Hiroo neighborhood to get some peanut butter at the National Azabu Market and also go to the New Sanno Hotel to make reservations for Easter brunch (the event will be sold out by March). Hiroo is about 30 minutes away from us by subway and requires us to change subway lines twice each way. The New Sanno Sunday Brunch is always amazing, but on Easter there will be added events for children including a small petting zoo and some arts and crafts activities. We thought the grandkids would enjoy that, and as Easter is also the week before we depart, the brunch will be an additional way to say thank you to our son and DIL for all their help while we’re here. The New Sanno also carries Diet Coke in their mini-mart – it’s unavailable in Japanese stores or vending machines – so we also wanted to pick up a 12-pack while we were there. Lucky Brett got to carry that all the way home.

The National Azabu Market is on the way to the New Sanno Hotel from Hiroo station. The Azabu and Hiroo neighborhoods are home to several embassies, and the National Market not only contains Japanese brands but many foods for foreigners living in the area. In our case, we were looking for unsweetened peanut butter as Japanese brands contain way too much sugar for our taste, and are also quite expensive. National has a machine where we could grind our own fresh peanut butter so we filled a small container with enough to get us through until we get to the commissary next weekend and stock up. Yes, we miss peanut butter that much, especially Brett! We also picked up some whole wheat rolls to have with our sausage dinner as well as a bag of small potatoes. Although it was hard to stay away when we were in the neighborhood, I am happy to report I did not go into the Sawamura bakery, where my favorite raisin bread is sold. I would have not been able to resist.

Below is what we bought this week, definitely less than our first week’s shop. Our shopping total from yesterday was ¥7055 ($64.68 plus $3 for the Diet Coke), but we still have a couple of things to pick up at the end of the week to go with our take-out takoyaki. I put ¥3000 back into our grocery envelope when we got home.

Dairy: We bought another liter of milk, two containers of yogurt (still ¥99/91¢ each), and 15 bottles of Yakult. Brett is now also drinking a bottle of Yakult every morning so we increased the amount from last week. Each container of yogurt provides three American-size servings.

Prepared foods: We purchased only two items in this category this week, a package of five nikuman (pork-filled steamed buns) and two tonkatsu, breaded pork cutlets that we had for dinner last night. The tonkatsu were huge but cost just ¥298 ($2.73) each. They were amazingly tender and delicious. The nikuman will get us through a couple of lunches.

Meat: We bought one package of beef cubes (about a half-pound for $4.53) for curry this week. For an additional ¥100, we could have gotten a slightly smaller package of Wagyu beef but we passed. 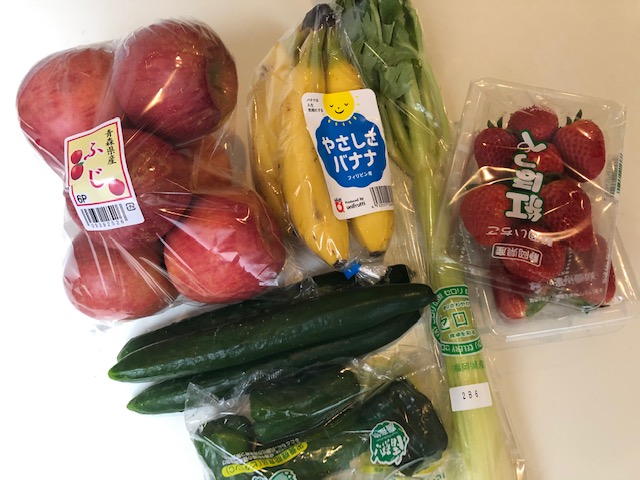 Produce: We bought a bag of six Fuji apples; three cucumbers; a huge stalk of celery for ¥149 ($1.37 – celery is not a traditional ingredient here); a bag of green peppers; four bananas; and two packages of strawberries. Fuji apples here are so much better than the ones we get in the States – much juicier and sweeter in comparison. I’m trying to eat one every day. The strawberries were still ¥377 ($3.46) per package. Green peppers in Japan are always very small for some reason, and typically come prepackaged in a bag of five. 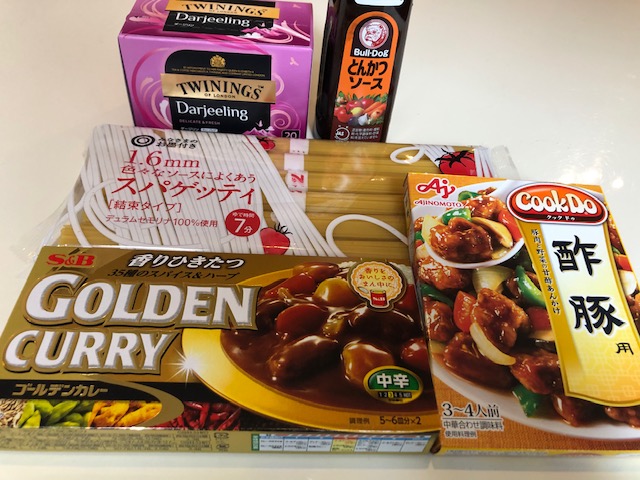 Pantry items: Brett wanted some tea, so we chose a box of Twinings Darjeeling for ¥394 ($3.61), sort of a splurge (although I like Darjeeling too). We also got Bulldog tonkatsu sauce (which can be used to make yakisoba too); CookDo sauce for sweet & sour pork; curry sauce (enough for two meals); and a package of spaghetti that was on sale for ¥198 ($1.82). I love that the spaghetti is bundled into servings! CookDo sauces are still on sale, so I plan to buy a few more packages later this week.

Finally, we took 8,178 steps (3.3 miles) and climbed and descended 20 flights of stairs on our shopping day!

20 thoughts on “Food Shopping in Japan Week #2: What We Bought, What We Spent”

A walk through a (battlefield) and a walk through the woods.
Eager to try his first Puppachino!!
Ready for fall!
Our daughter-in-law brought us tomorrow’s breakfast: rainbow sprinkles, campfire s’mores, and maple bacon doughnuts (the sprinkles went home with K). Thank you, M!
Finally!
Shaking my head . . . mangoes were a luxury item on Kaua’i unless you had a tree in your yard. They were $5 for ONE at the farmers’ market there (and they weren’t organic)!
Join 1,099 other followers