Our son’s home is the next stop from our subway station but requires about a mile’s walk once we leave that station. I have yet to be bored with the walk even those Brett and I have made it more times than we can count. The walk always offers a slice of “real” Japan and “real” Tokyo, and we continue to discover new things along the way every time we make the journey.

(The pictures below were taken on two different days, which is why the sky is blue in some and not in others.) 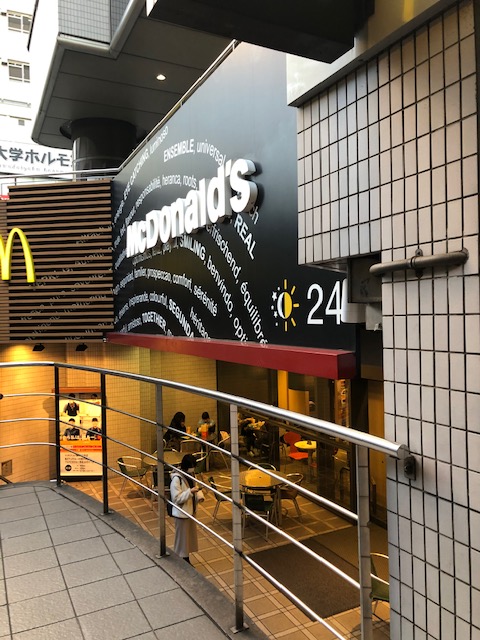 We pass a 24-hour underground McDonald’s on the way out of Komazawa-Daigaku station. We’ve never gone in. 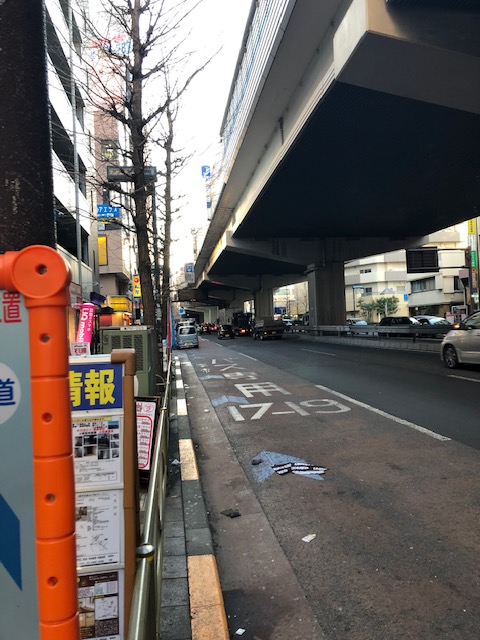 Once out of the subway station we begin a long walk alongside a busy major street (cars drive on the left in Japan); up above is an expressway. The stacking is common throughout the city as it saves room in crowded Tokyo. In fact, just a little farther down the road, closer to where we’re living, we just discovered there are actually TWO expressways stacked on top of the road, one on top of the other. Some of the bare trees on the side of the street are ginkos, but I’m not sure what these are. Yes, it’s much more attractive when they’re leafed out. 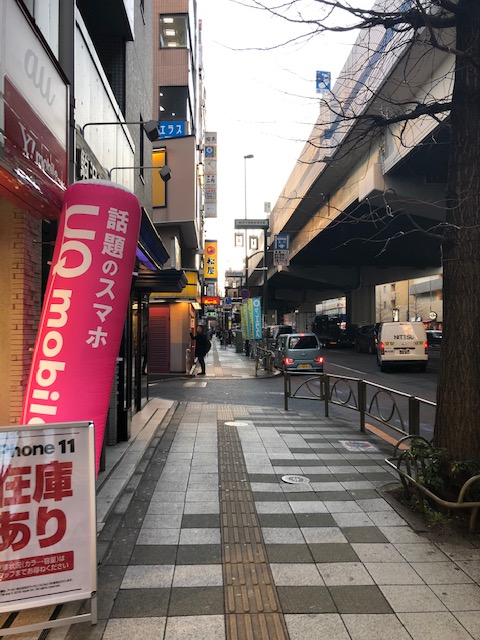 This is our view down the sidewalk as we get started. We walk on the left side going to our son’s, on the right coming back, often single file because of the number of people using the space. There are all sorts of shops and restaurants along the way, just about everything you could imagine, with offices and apartments above (an apartment building will have balconies; an office building won’t). 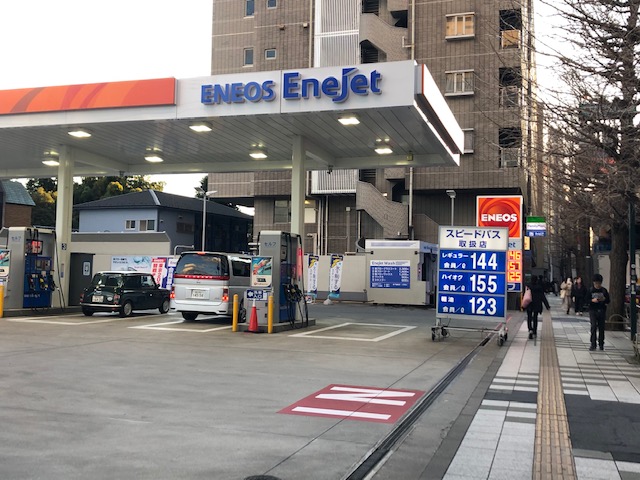 There are many tempting restaurants on the road, like this traditional ramen shop with its glowing lantern. 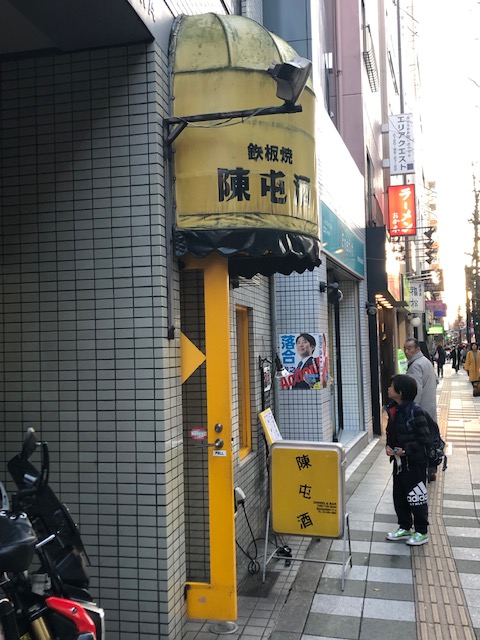 Our favorite though is this little okonomiyaki (Japanese savory pancake) restaurant, run by a woman and her son. It’s very cozy and old-school, and the food is very good! 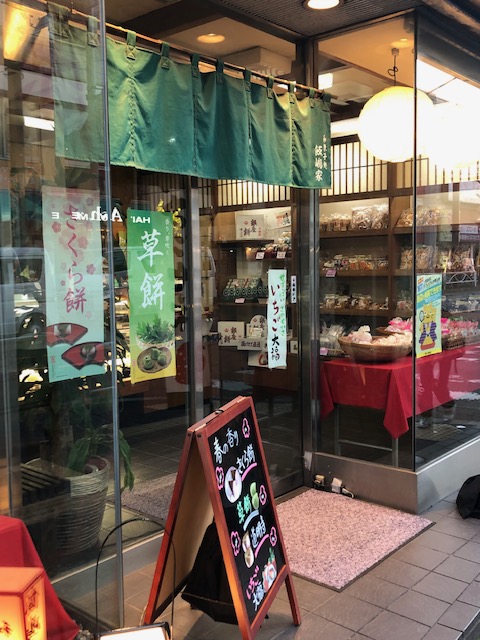 Eventually, we turn a corner and head for the Komazawa Olympic Park. Right after the turn is this traditional sweet shop, with a noren (shop curtain) over the door. Strawberry sweets are big now, but I want to stop in one of these days for some sakura mochi (mochi folded over a sweet bean filling and then wrapped with a pickled cherry leaf). It’s my favorite, and only available for a few months every year, around cherry blossom season. 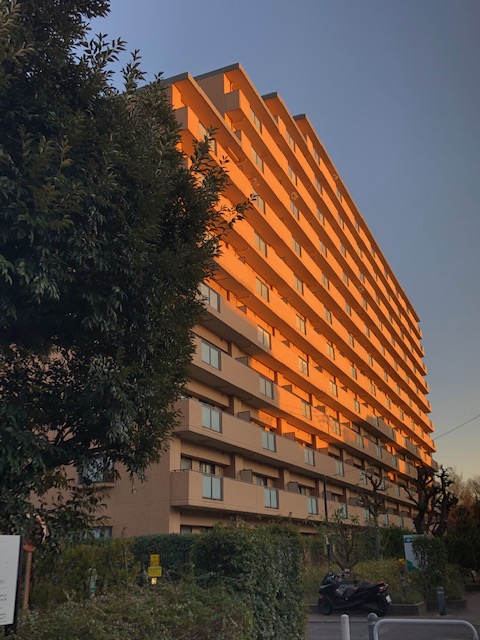 Mitsubishi corporation employees can live in one of these subsidized apartments. They range in size from two rooms to some rather large apartments with terraces, assigned I assume, according to one’s position in the company. This complex contains three other equally large buildings. 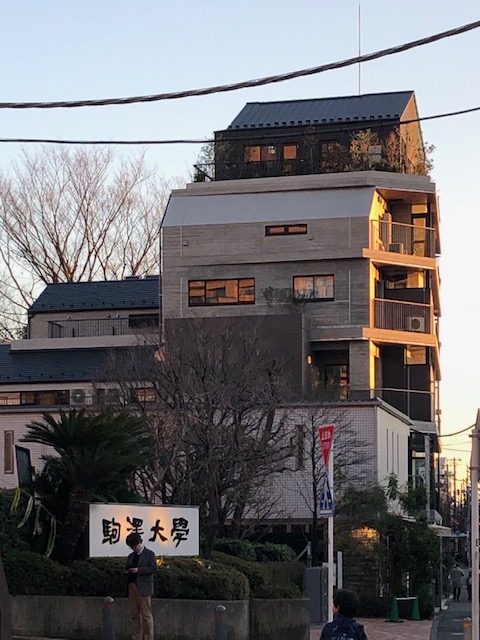 A little further along, we walk past the entrance to Komazawa-Daigaku (Komazawa University). The apartment building in back is new since last year – and they built a separate little house on top! 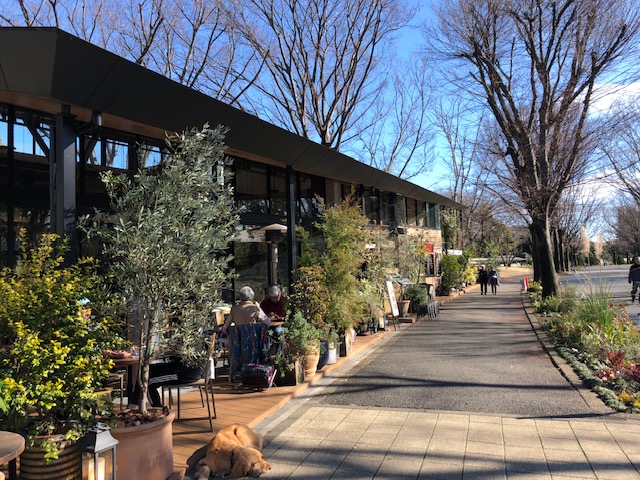 We eventually reach Komazawa Olympic Park, where we turn left and pass by a pretty vegan restaurant called Mr. Farmer. We’ve checked out the menu but it’s expensive and nothing on the menu really appeals to us. 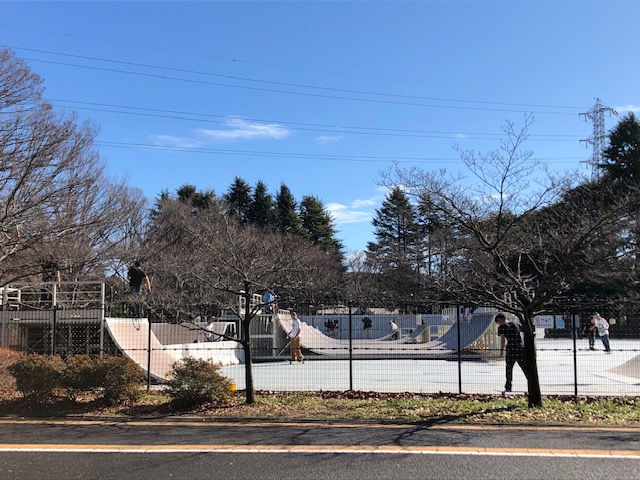 We turn right at the large skateboard park. 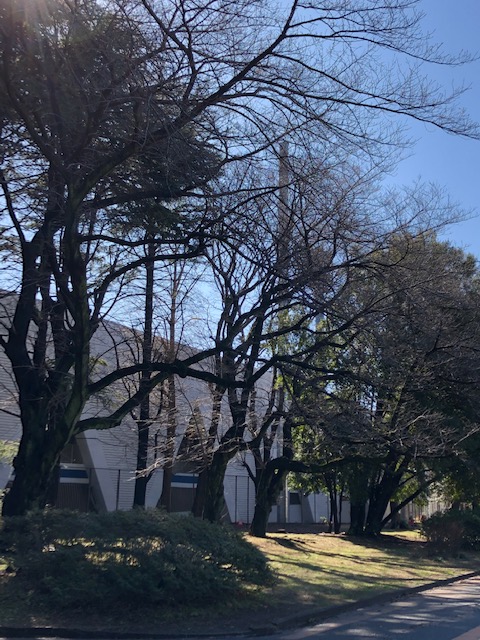 Just past the skateboard park is the new baseball stadium, which was under construction all last year. Those big, bare trees will be loaded with cherry blossoms in April! 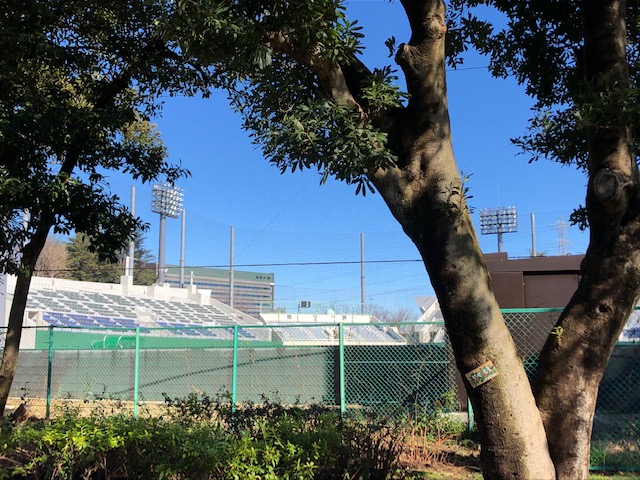 Some of the seating in the new stadium. We thought it might be have been built for the upcoming Olympics, but it’s used by local college and high teams, for games and tournaments. Our son said it’s incredibly noisy when a game’s going on. Although the sports venues at Komazawa Olympic Park were built for Olympic sports and crowds, there is a lack of transportation infrastructure in the area that makes holding such events there impossible. 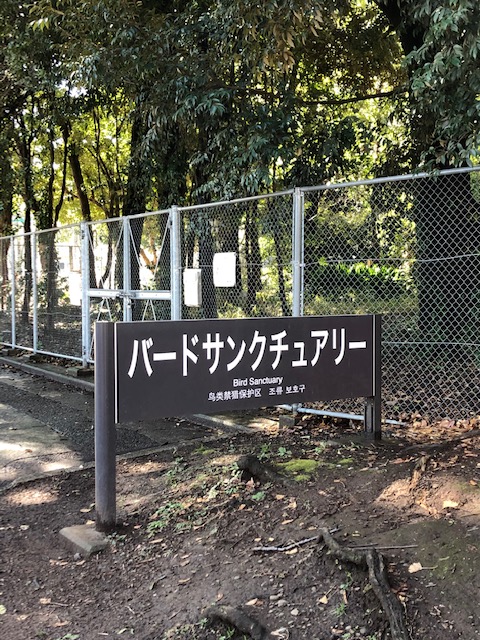 Just across the road from the stadium is a small bird sanctuary that we walk past, although we’ve come to call it the “cat cafeteria” because there are usually three to four cats waiting inside the fence. We’ve even seen people leave out food for the cats. We have yet to see a bird there. 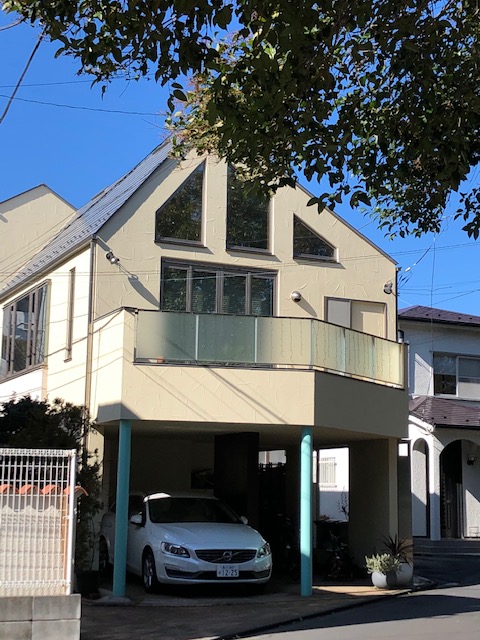 A couple of turns later and we’re at our son’s home! It’s a big house for Japan and sits among several other big houses along a narrow road. It has a large, bright open plan living/dining/kitchen upstairs, five bedrooms (including a traditional tatami room) on three levels (two are used for offices), two toilet rooms, a large bath, two balconies, one in the front and one in the back, and lots of storage. It doesn’t have any yard but there is a small garden area on the right.

We usually don’t walk back through the park when we walk back to the station at night, but instead walk up the street and turn right back onto the street we walked on to get to the park. It saves us a few steps doing it that way, but during the day we prefer the scenery and activity in the park.

24 thoughts on “The Walk to Our Son’s House”