We’ve survived another very busy week with the grandkids! Because of meetings, school activities, and such, schedules were a bit crazier than usual this week, but we got to where we needed to be on time and all went well, although Brett and I are feeling a bit more tired because of the amount of walking we’ve done. We are sleeping very well at night these days though – exhaustion helps!

In spite of our busy pick-up schedule, we were still able to get out and do a bit of exploration in the area. Our goal this visit is to choose free activities and see and do things we haven’t before. So, on Tuesday morning we continued walking past the Seiyu department store to discover what there was in that direction, and we also explored a few of the alleyways in the neighborhood to see what was going on there. We were excited to find a couple of new restaurants we’d like to try for our Friday dining out, including a Hiroshima-style okonomiyaki place, and another one that serves Singapore style noodles. We finished Tuesday with a ride to the top of a local high-rise office building, Carrot Tower (it’s covered with red-orange brick), and were rewarded with an amazing 360° view of the Tokyo metropolis. We got a close look at our neighborhood from above and made a few discoveries as well. Both Brett and I commented to each other that while looking at Tokyo from up high is amazing and somewhat overwhelming, it gives absolutely no indication of all the energy happening at street level, and all the wonderful, interesting places that exist on those streets and throughout the city. 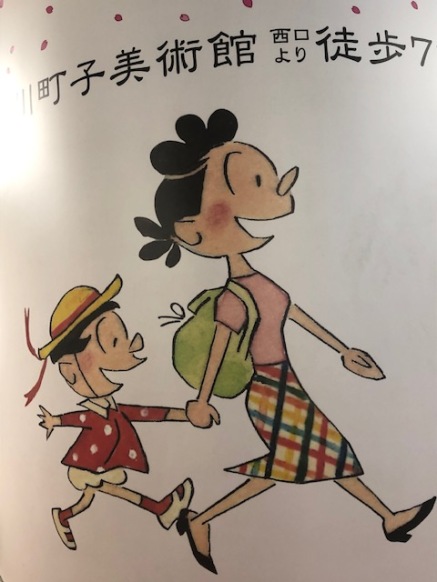 Sazae-san greets you the minute your step off the train 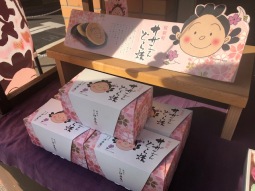 Bronze statues of Sazae-san, her husband and their son . . .

. . . along with her parents and her younger siblings 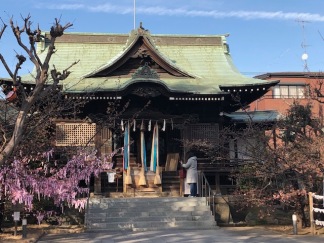 A small shrine just down the street from the subway station

The pink ribbons on the cherry tree carry wishes

Cherry blossoms will be open soon!

One of the two Komazawa water towers.

A traditional roof over the entrance to a new building 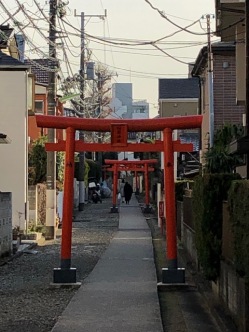 Torii gates line the Pilgrim’s Path to the Hisatomi shrine 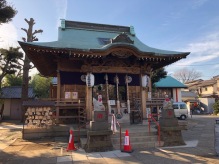 Two foxes stand guard in front of the shrine’s entrance

The purification fountain at Hisatomi-jinja

Instructions for how to purify yourself before entering a shrine

On Friday we went to Sakurashinmachi station, two stops down from our station, Sangenjaya, to look for a couple of places noted in Secret Tokyo. Sakurashinmachi (“New Cherry Blossom Town”) is famous for being the home of Sazae-san, a beloved animated show that’s been on the air for over 50 years (and holds the Guinness record for most episodes in an animated series). Sazae and her extended clan are an archetypical middle-class Japanese family, and over the years the show has offered considerable insight into Japanese daily life and culture. Images and statues of Sazae were found all over in Sakurashinmachi, and we stopped at a Sazae-themed traditional sweet shop so that I could get a couple of pieces of sakura mochi. With some much-appreciated help from a couple of local residents, we were able to find two nearly 100-year-old towers that were used back in the day to supply Tokyo with fresh water. Built in the early 1920s (Taishō Era), the Komazawa water towers survived both the Great Kanto Earthquake of 1923 and World War II, and these days are a heritage site (a third tower was planned but never built). They were spectacular and well worth going to see. We also visited two small but beautiful shrines while we were there: the Sakura-jingu shrine, which had two cherry trees almost ready to burst into bloom, and the Hisatomi Inari-jinja shrine, a fox shrine (also recommended in Secret Tokyo).

Although the week’s temperatures started out nicely, by mid-week it had turned bitterly cold. On Tuesday it was overcast but warm enough that I didn’t need a coat, just a sweater, and on Wednesday we woke to a nice clear, sunny day and warmer temperatures again. Something told me though to put on my coat when we headed out at a little after 2:00 to pick up the grandkids from their schools, and at the last minute, I also decided to also tuck my scarf into my bag. Both those choices turned out to be smart ones because by 4:00, the wind had picked up and the temperature was falling fast, to the point where it was close to freezing by the time we got home! Thursday was also very cold and very windy while on Friday it was still cold but at least without the wind. I can deal with the cold as long as it’s not raining, and thankfully our apartment is always toasty warm. Yesterday it was sunny but it’s still very, very cold.

On a more serious note, we are monitoring the current coronavirus situation here in Japan as closely as we can, and our son keeps us updated. A cruise ship is currently anchored and quarantined in Yokohama, and an additional 41 cases of the virus were just registered on the ship on Thursday, including eight Americans (total number with the virus is 64, but more cases are expected, and another four were announced this morning). Outside of ship passengers, the total cases of the virus in Japan stands at 25, and there have been no deaths. Unfortunately, Japanese researchers have discovered that over 50% of cases are spread before anyone shows any symptoms. The main advice we’ve received for now is to avoid areas where large amounts of tourists regularly visit, which means that we won’t be visiting Asakusa and Sensō-ji, Yokohama, or the Meiji Shrine or Harajuku any time soon. We also avoid taking the grandkids through crowded stations, like Shibuya. Mask usage among the Japanese is normal for this time of year (they are used more to keep germs in rather than keep them out anyway), but we are being more careful about handwashing, etc. In other words, we’re not panicking, but staying alert and being careful.

That’s a wrap for this week. We enjoyed another great one here, are looking forward to the next, and wishing the same for you!