We are currently trying to stock up some, although as the pictures above indicate, we don’t have a whole lot of extra room to store things. And, we’re only here for around six more weeks, so don’t want to buy more than we can finish. This past weekend we bought some extras at the Hardy Barracks mini-mart, mainly frozen foods and bread. Those items should help keep our regular grocery shopping costs down going forward.

We spent more than intended today at Tokyu though: ¥9,126. Our regular groceries weren’t too bad, but we were there when a few paper goods – toilet paper, tissue, and paper towels – were being put out. We got one of each, including the last small package of toilet paper. We have enough supplies now to last us until we leave. We also found three new special spring flavors of KitKats so had to get those. We spent ¥2,293 at Kaldi Coffee Farm yesterday so our weekly total is ¥11,419/$106, ¥1,419/$13.17 over our weekly budget. We will have to cut back next week, but should be fine because we currently have a LOT of food in the apartment, enough for at least three weeks.

We noticed today that the shelves of instant noodles in Tokyu looked rather picked over and empty. Some of those products come from China and South Korea, so there’s possibly a supply chain issue because of the virus. Otherwise, all food items were well-stocked in the store.

Here’s what we bought his week (apologies for the quality of the photos, but it was rainy and gloomy outside and the inside lighting wasn’t much better):

Dairy: We bought the usual: nonfat milk, nonfat yogurt, half-dozen eggs, and Yakult, which had doubled in price from what we have been paying, ¥398 vs. ¥200. Not sure if that’s because of a supply problem or if we had previously been buying it on sale. 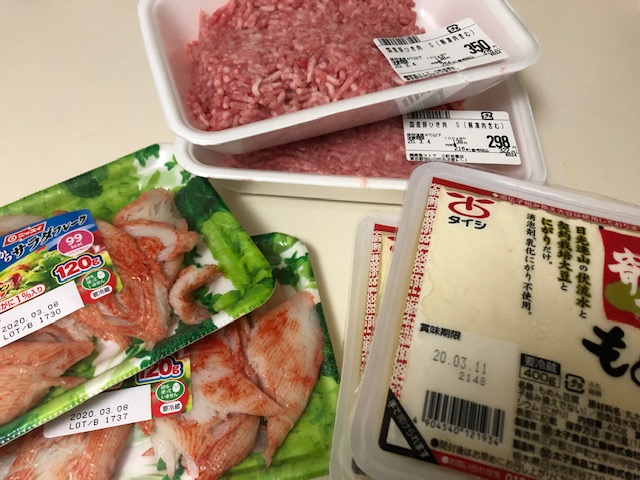 Produce: We got lots of produce this week: four apples for ¥158/$1.47 each, two kiwi fruit, a head of lettuce for just ¥73/68¢, five bananas, eggplants for mabo nasu, green onions, yellow onions, two avocados (also ¥158 each), and three cucumbers (¥98 for three). Fruit in Japan is always ridiculously expensive.

Prepared foods: Tokyu didn’t have any gyūdon in the prepared food section, so we bought two Korean beef kalbi bowls. For ¥464/$4.29 we bought a small piece of pork cutlet with sesame-soy glaze and four korokke (potato croquettes) for lunch for the two of us today. By the way, I had thought about making the gyūdon from scratch, but the beef cost more than the two bowls we bought, and I would have needed a couple more ingredients as well so decided against that idea.

Pantry items: Just two packages of CookDo this week, for mabo nasu and mabo dofu, which will be on the menu next week. We forgot to get a tube of wasabi paste, so we will have to stop somewhere for that this week (it’s used in the California Roll Salad dressing). 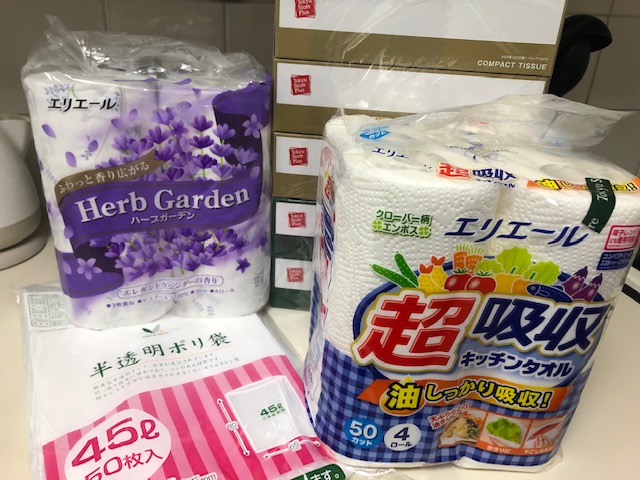 Paper products: About 10 packages of each of these products were being put out while we were there. Brett got the last 4-pack of single-ply “Herb Garden” printed toilet paper, and also grabbed some store-brand tissues and paper towels. The total for the paper products was ¥848/$7.43. The toilet paper alone was ¥268; last week we got a 12-pack of double-ply for ¥398. We also got a package of trash bags.

Miscellaneous: I got two bottles of “16 Tea,” an herbal blend of 16 ingredients (with no caffeine) that I enjoy now and again. We also found three new springtime KitKat flavors: Easter (banana), sakura mochi, and sakura sake. The last two flavors were not cheap (¥348 each) but very unique so we snapped them up. We’re now up to 25 different flavors!

Kaldi Coffee Farm: We bought their last two jars of natural peanut butter, some Boursin pepper cheese and camembert from France (both on sale), and a package of cough drops for Brett. Three days ago they had caseloads of the peanut butter but it was all gone yesterday except for the two jars I found hidden on the back of the shelf behind some other brand. Hmmmmm.

Next week I will have some pictures of some of what’s inside the Tokyu store, but in the meantime, I made sweet and sour pork on Saturday evening using a CookDo sauce and took some pictures to show why I love using CookDo (outside of the fact that it tastes really, really, good):

Even though I can’t read most of the writing, there’s always a clear picture on the front of what the finished product looks like so I can get an idea of the ingredients and what size I need to prep them. Inside the box is a pouch of sauce. 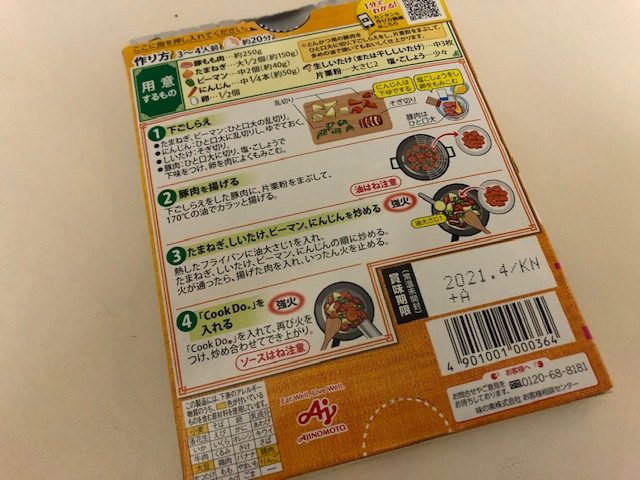 On the back of the box are more clear illustrations indicating how to prepare the dish. Weights (metric) are given for how much of each ingredient is recommended. 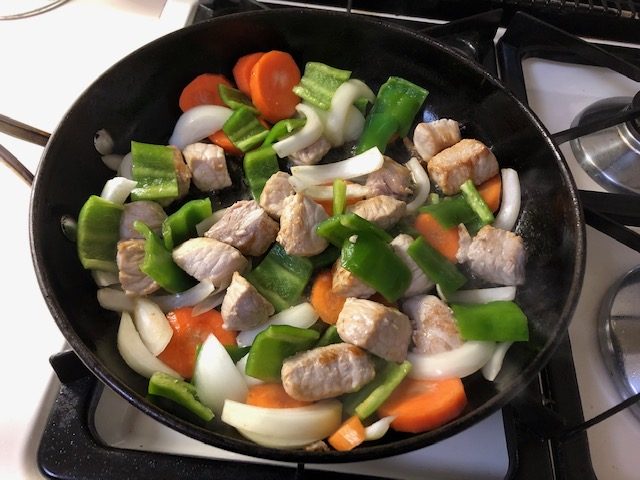 The first step is to prep and then stir fry the ingredients. For the sweet and sour, that’s cubed pork, green pepper, carrots, and onion.

After ingredients are cooked how you like them (we like the vegetables crisp-tender versus soft), add the sauce from the pouch and stir about one minute to heat through and coat all the ingredients. That’s all – it’s ready to serve. The total time from start to finish is less than 10 minutes (not counting prepping the ingredients).

One package of CookDo makes three servings, so there are leftovers for someone the next day. CookDo is not particularly inexpensive in the U.S., but I bought it occasionally as special treat for our family because the girls love it. The most commonly found varieties in the U.S. are mabo dofu (tofu and ground meat) and mabo nasu (eggplant and ground meat), both in a miso-flavored sauce, but at a Japanese-centric market more varieties are usually available.

10 thoughts on “Food Shopping in Japan Week 7; What We Bought, What We Spent”

Joe Exotic
A gift for Brett from our neighbor’s yard!
Dose #2, done and done! (I’m smiling under my mask)
We went out to see the Kilauea lighthouse after our doctor’s appointments and a nice man took our picture.
Every once in a while we spot an “exotic” chicken up at the park, apparently released there by someone who got tired of raising them and thought the park would be a safe place. Actually, it’s not - many of the wild jungle fowl (third picture) are aggressive and “natural born killers” and don’t take kindly to strangers in their midst.
A beautiful afterglow tonight instead of a sunset.