This week’s food shopping was a little different in that Brett and I did it yesterday (Sunday) instead of today (Monday). We’ll be over at our son’s all day tomorrow helping out with the grandkids, and knew we weren’t going to feel like shopping afterward, so decided to stop and do it on our way home from a day out visiting temples. Of course, what we didn’t count on was being exhausted as we were following our outing! A big difference we noticed was how crowded the store was on Sunday compared to Monday. Also, the shelves are still empty of all paper goods, alcohol wipes, hand sanitizer, etc.

The total for our Tokyu shop this week was ¥6350/$59.72. We also stopped in at Kaldi for a couple of things and spent an additional ¥1238/$11.64, for a total of ¥7588/$71.36 bit. Everything we bought fit into two shopping bags this week, and my hero, Brett, carried everything home. The dollar has improved slightly against the yen compared to last week, so what we paid in U.S. dollars was a little less.

Here’s what we bought yesterday:

Dairy: Just the usual: Nonfat milk, nonfat yogurt, and a 10-pack of store brand Yakult. There were no changes in their prices from when we first bought them. Brand-name Yakult was back in stock, but a 5-pack cost more than the 10-pack of the store brand (¥200 vs ¥148). 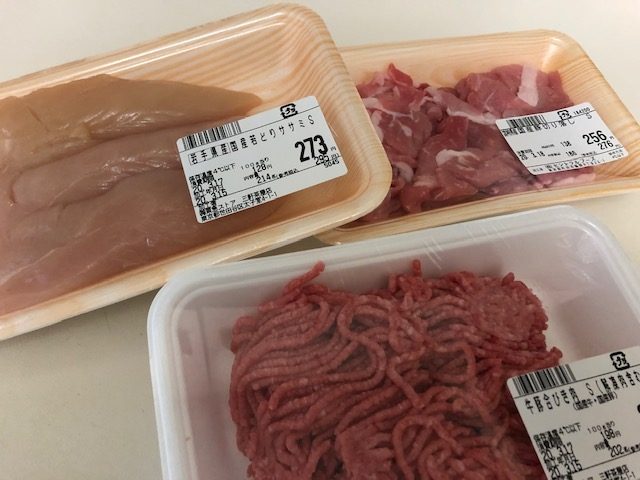 Pantry items: We needed rice, and Tokyu had these small bags that were less expensive than the rice we bought at Seiyu when we arrived. The bags came in four varieties grown in four different places in Japan with four different prices,. We chose the least expensive (¥590/$5.47) since we know absolutely nothing about Japanese rice. The other pantry item was CookDo sauce for stirfried pork and peppers.

Beverages: I got three bottles of 16 Tea (still ¥88/82¢ each), and Brett got himself a bottle of ginger ale (also ¥88). If the ginger ale and one of the tea bottles look like their missing something, it’s because we were so parched when we got home we both opened up our bottles before we even entered the apartment! 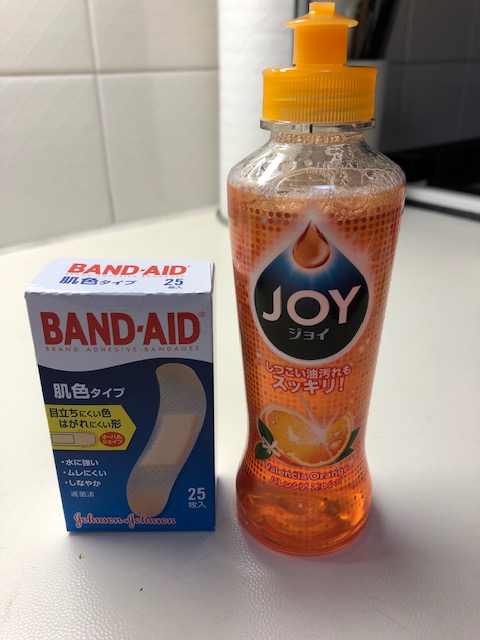 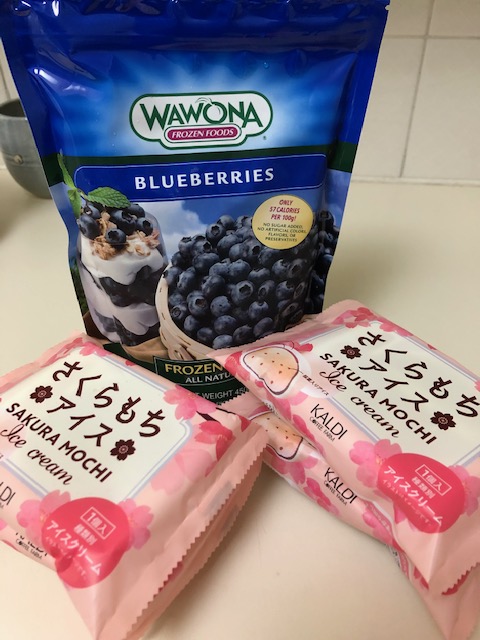 Kaldi Coffee Farm: We enjoyed the sakura mochi ice cream so much that we bought four more (still ¥150/$1.39 each), and I also grabbed a bag of frozen blueberries (¥590/$5.55). The entire bag was only slightly more than a tiny box of fresh blueberries at Tokyu (¥547/$5.15) that had only around 30 blueberries in it and contain at least five times as many berries. We also meant to pick up a bottle of maple syrup but forgot so we’ll get that next week.

We didn’t even look at prepared foods this week as a) we have a ton of leftovers right now in the refrigerator that have to be eaten, and b) we are going to have sushi later this week from one of the sushi stores down the street from us. They both have an amazing selection, so we plan to get a nice variety and will also count it as our dining out for the week.

This week I have a mystery for you! Can you guess what the three items at the top of the post are? Here’s a clue (maybe unhelpful): although one is pink, one is white, and one has a grilled top they are all the same.

Only four more weeks of food shopping left in Japan – the time is flying by.

28 thoughts on “Food Shopping in Japan, Week 9: What We Bought, What We Spent”

Slow traveling the world with a sense of adventure!