What an insane week this has been! It’s hard for me to believe that a week ago this time we were still in Japan, although we were getting ready to leave. Since then we’ve gone through our trip back to Kaua’i, the efforts to get YaYu here, and now we’re starting the process of resettling on the island in the middle of a pandemic and quarantine. It’s been hard to take it all in at times. 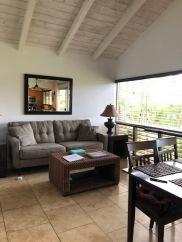 Spiral staircase up to the loft 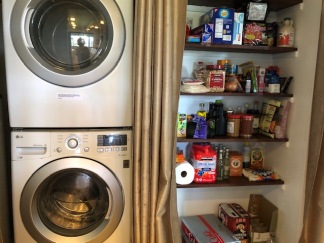 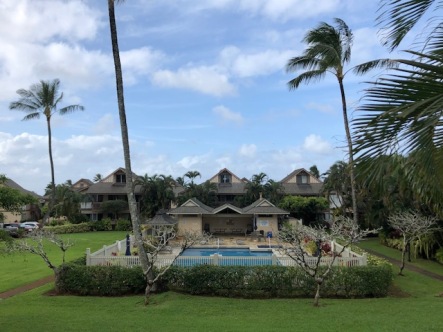 View of the pool from the lanai

Quarantine Life: Where we’re spending most of our time for the next two weeks.

YaYu arrived home on Friday evening, but not without a bit of work. After two cancellations and two schedule changes to her original itinerary, we were nearing our wits’ ends, and when Delta changed her flight once again to Saturday we said enough! I called Delta and in five minutes had her on a new flight that departed early Friday morning. Her boyfriend’s mom and I set up a plan about what to do if she got stuck anywhere, so those bases were covered before she departed, but thankfully each of the three flights involved in her itinerary took off on time and even got her here to Kaua’i a little early. I had a fairly sleepless Thursday night/early Friday morning though as we had asked her to message us each time she arrived at her layovers, and then each time she boarded the next plane – we needed to know she wasn’t getting stuck somewhere. She’s now settling into her quarantine, and Brett and I are feeling a lot more relaxed than we were. 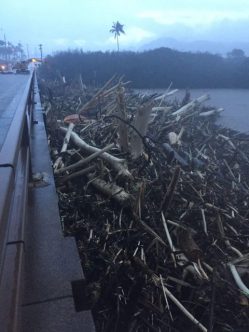 Working through the night to remove the logs

The Wailua Bridge remains closed until the log dam behind it, created by Friday night’s torrential rains, can be removed.

The rain since we arrived has been nearly non-stop and quite heavy at times. Friday night was the worst, with massive amounts of rain falling all night along with a fierce thunderstorm. Lightning was all around and struck the golf course next to us a couple of times which was VERY loud and shook the entire condo. As you can see from the pictures at the top, roads and bridges around the island had to be closed because of flooding. People also had to be evacuated from their homes in the middle of the night, but thankfully no lives were lost nor was anyone hurt.

We got our car the day after we arrived, and on Wednesday found a place to live following YaYu’s quarantine. Brett and I went out that day and looked at two places on the south side (Koloa/Lawai/Kalaheo) that we had spotted on Craigslist. The first place was nice, with two bedrooms and gorgeous views of the countryside, but the trip up to its location and then back down to the highway was quite treacherous, and the rent was also at the top of our budget. In fact, by the time we made it back to the highway (alive) we had decided we didn’t want to live there even if we were accepted (we weren’t). The second place we looked at was a smaller, older apartment. It was a nice size and in a much better location; the rent was much less and included utilities; and, it came with a new refrigerator and a new washer and dryer (we would have had to share the washer and dryer at the other place). There was also a nice yard where Brett could putter around. After checking it out we said we would take it and were accepted on the spot (we still had to pass a credit and criminal check, which we did easily) and we will officially be in possession of the apartment on Tuesday. However, we have to stay at our condo on the north side until April 11 as YaYu is under full quarantine and has to stay inside here, but that will give Brett and I a few days to go down and try to get the place set up as much as possible before our official move-in. I’m not sure how much of that we can accomplish as almost all stores on the island are closed and movement is limited, but at the least, we should be able to get a bed, sofa, and a TV in to get us started, and we can eat Costco casseroles and sandwiches, and use paper plates until our things arrive from the mainland. We have no idea how long that will take though – Amazon shipments are currently taking a month or more at a minimum to get over here so getting our stuff across the ocean may take much longer. In other words, getting re-settled is going to take a good, long while, but we now have the basics in place and are moving forward. It’s been great having our old car back too – it runs great and makes us feel like we never left. All that’s left to do is transfer the title but county offices are currently closed so whenever they reopen we will take care of that piece of business.

Lots of counter space, but the bar sink will be an interesting challenge.

Private deck out to the back yard

Although schools in Japan are supposed to be reopening next week, according to our son, Tokyo appears to be moving toward stronger quarantine measures at the same time so whether the kids will go back is still unknown. A resurgence of the virus is expected, and the government is ordering/recommending stricter measures short of a full lockdown in hopes of keeping the virus tamped down. By the way, it snowed in Tokyo yesterday – unreal for this time of year!

I have tried not to think about how much money we may have lost over all the changes we had to make to our travel plans in the past couple of weeks. We are outside the no-fee change dates for the flight we booked on Aeromexico to go from Mexico City to New York in May as well as our flight from Boston back to Portland on Alaska in early June. We can pay a cancellation fee with Alaska and at least get back about 68% of what we paid, but the Aeromexico flight is a complete loss. Delta fully refunded our Dallas to Mexico City flight (Delta has been amazing during all of this and we will remember that when it comes to future travel). We also lost the entire amount we paid for our one-night stay in Vermont following WenYu’s graduation as any cancellation included the first night’s stay and we were only there for one night. Our Airbnb host in Mexico has also refused to refund all of what we paid because if she cancels she loses her Superhost status, but she has agreed to return 75% of what we paid and give us the rest in a coupon toward a future stay. She hasn’t been able to accomplish anything from her end though, and we have asked Airbnb repeatedly to look into it, but who knows how long that will take or if it will ever be resolved. If we cancel we will lose everything. I realize these are all first-world problems, and others are hurting far worse than we are, but it’s still extremely frustrating. We are grateful for all the people who did refund our money and I hope we will get some further relief from Airbnb, but I’m not really counting on it at this point.

Finally, the answer to the mystery food I posted a couple of weeks ago: the food shown above are fish cakes! Called kamaboko in Japanese, these mild fish cakes have been eaten in Japan since the 14th century. Made from pureed, deboned whitefish, the fish is formed into loaves on a narrow piece of wood and then steamed until they have the consistency of a firm sausage. Besides the standard loaves shown above, kamaboko is also formed into a variety of different shapes for other purposes, such as for oden, Japan’s most famous winter stew. Kamaboko is eaten and enjoyed in a variety of ways, such as fresh and dipped into a sauce, or sauteed and served warm, or sliced and added on top of a bowl of ramen or other noodles. The pink color and the grilled topping are done purely for aesthetics – the three versions above are otherwise the same. Red kamaboko is also available; it is most often used on holidays or for special celebrations. Kamaboko is popular in Hawaii too – it’s made locally and always served with saimin. It is also sometimes used to make a tasty dip!

Thank you for all your support over the past week or so – it’s been quite a roller-coaster ride! We are missing Japan and our family there so much still, and that’s been hard to deal with along with all the worry over getting YaYu back to us. The next couple of weeks are going to be hard as we get ourselves moved into more permanent housing. But things have and will work themselves out, and all your comments have helped. Here’s wishing you are all well and continue to stay that way, and that in spite of all that is currently swirling around us, that you and yours stay safe and healthy, and good things continue to happen.