I took a lot of photos during our travels. A lot. I go through them fairly frequently these days, to look up something or just to remember and reminisce. The other day I gave myself the task of picking my top ten favorites – impossible! I started with a total 42, then got it down to 25, and eventually, with a great deal of thought and effort, was able to winnow it down to the 13 photos below. That was it though – I couldn’t remove any more off my list of absolute favorite.

These photos all carry a flood of memories with them, beyond the time and day the picture was taken. For some of them, I just happened to be in the right place at the right time. Other times I got a little help and was able to catch a special shot. Two of them are even from the same location!

I do have a favorite – it’s mentioned below – but otherwise I didn’t rank these photos; they’re in chronological sequence of the places we visited. 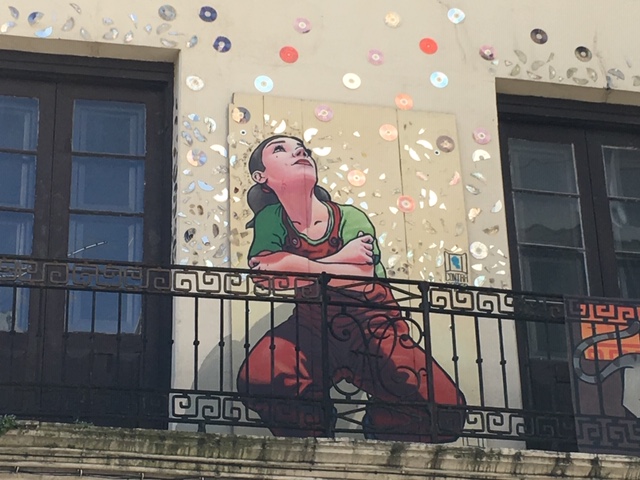 Brett and I both sought out and discovered street art in every place we visited, and never failed to be amazed and awed by the talent and beauty we were privileged to see, created by both the famous (Banksy) and the unknown. The works appeared all over too, and in unusual places – we never knew where and when we could be surprised by a piece of art. The picture above, from Montevideo, Uruguay, was one of those surprises (always look up!) and remains my favorite. 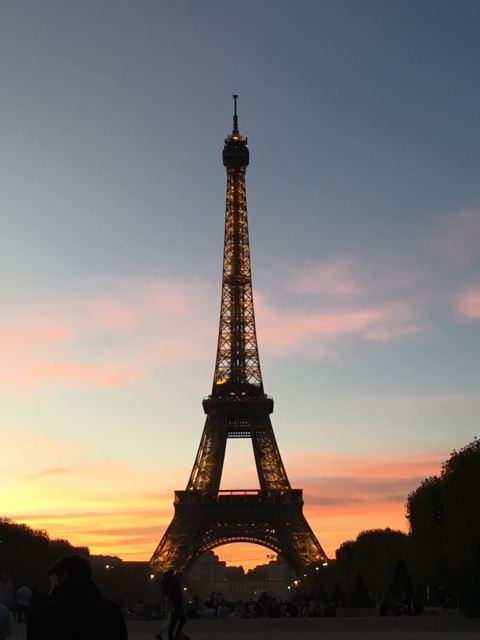 The Eiffel Tower was our last stop on a busy, hot day in Paris. We had started with the Arc de Triomphe, followed by a walk down the Champs Elysées, a picnic lunch in Jardins de Champs-Elysées, and a visit to the Louvre to see the pyramids in the courtyard before finishing with the Eiffel Tower in the late afternoon. It had been a particularly hot day, with temperatures in the 90s, and so we sat in the park in front of the tower with a couple of cold drinks to wait until it cooled off a bit before we headed back to our apartment and to watch the lights on the Tower come on. The sunset behind the Eiffel Tower was a special reward, an unexpected piece of magic at the end of a wonderful day. 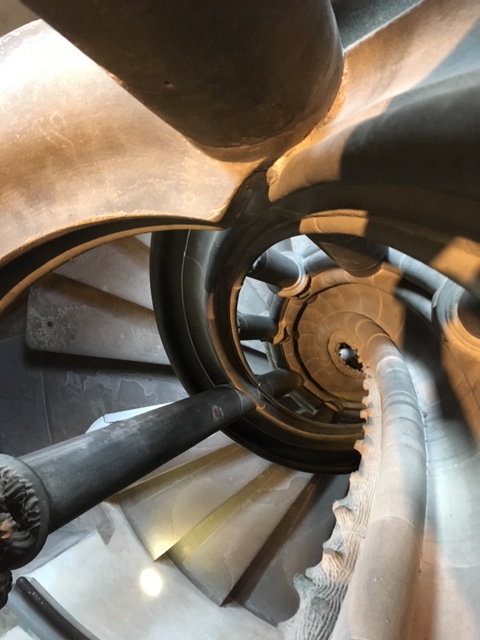 Strasbourg remains our favorite of all the cities we visited on our travels. We spent three weeks there, living in a tiny studio apartment (less than 300 square feet) and sleeping on a sofa bed (which had the most comfortable mattress of the entire trip!). We walked all over or used public transportation to explore all the city had to offer, from the historic Petite France neighborhood to the European Union Parliament buildings. On one of our last days in Strasbourg, we finally got around to visiting the Musée de l’Œuvre-Notre-Dame, located across from the Strasbourg Cathedral. Housed in a building from the 14th century, the photo was taken from the top of its spiral staircase, still used to get to the exit. 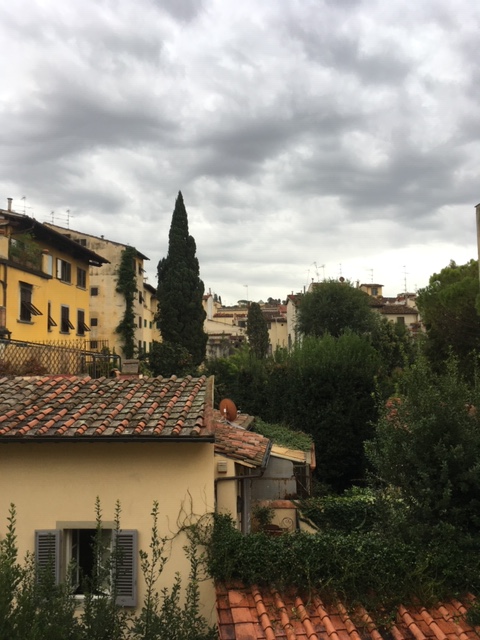 The view from our kitchen in Florence reminded us every day of our month there that we were in Italy, in Tuscany. A look out the window was better than a painting, both timeless and yet never static. 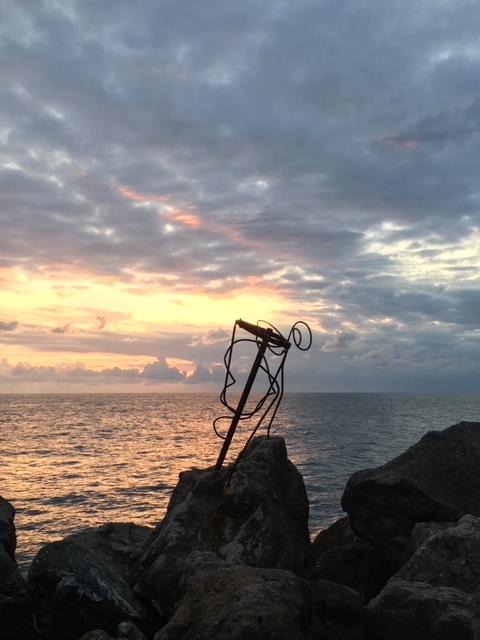 We had a crazy time getting up to the Cinque Terre for a quick getaway. Bad weather initially delayed the trip, and when we could finally go we kept getting things wrong, including getting on the wrong train after lunch in Monterosso and ending up all the way down in Spezia before we could get off and make our way back. We finally arrived in Vernazza in the late afternoon where we strolled through the village down to the waterfront, just in time to catch the sunset over the Mediterranean. 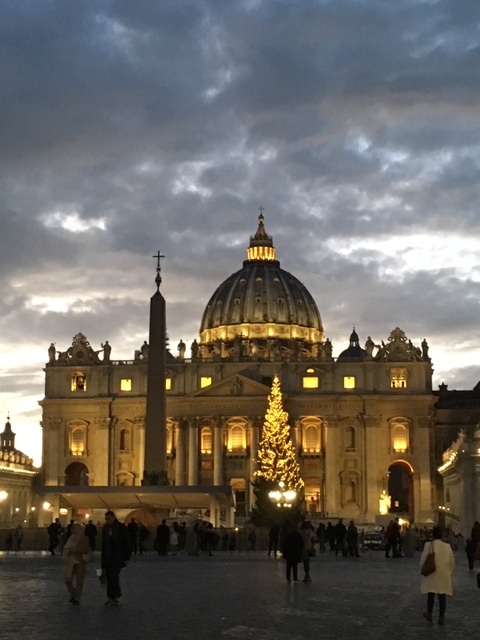 Both Brett and I came down with bad colds when we were in Rome. Other than a longish (but fantastic) small-group walking tour of the Colosseum, Palantine Hill, and the Roman Forum, we limited ourselves to exploring places we could walk to from our apartment, located just five minutes away from the Vatican. Coming back from a visit to Piazza Navona and the Pantheon, we walked along the Tiber River up to Vatican City. It had been a wet day but the rain had stopped and the clouds were breaking up. I snapped this picture of St. Peter’s right as the lights at the Vatican were turned on for the evening. Of all the photos I took during our travels, this one is my favorite. 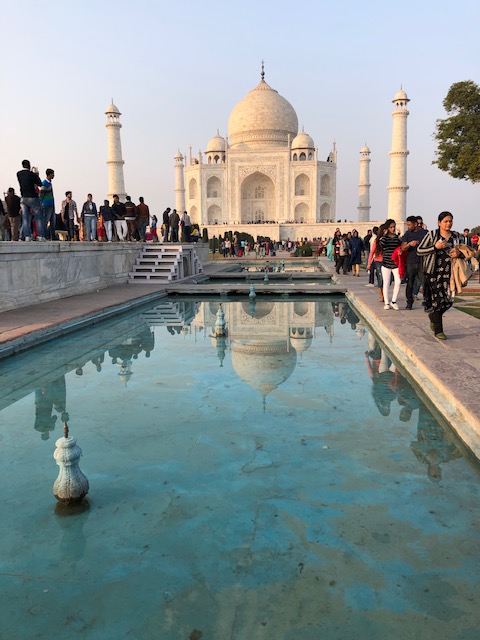 I was walking back to the exit at the end of our visit to the Taj Majal and kept turning around to take pictures, trying to get that last perfect shot. An older man grabbed my elbow and said, “come.” He took my arm and started walking away with me, which frightened both Brett and me, but he brought me to this point at the end of one of the pools, where he turned me around and said “here.” It was exactly the picture I had been hoping for, catching the reflection of the monument in the fountain pool. I said thank you, he raised his hands and bowed his head, and then blended back into the crowd. 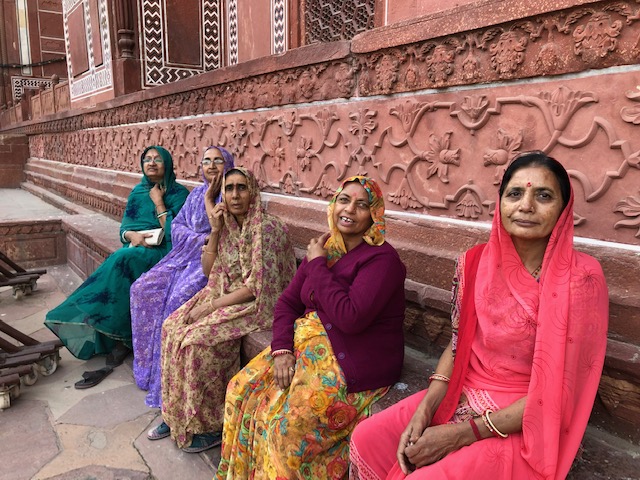 I spotted this group of women in their colorful saris just before we passed through the exit at the Taj Mahal, waiting for family members to come back from their sightseeing. I asked if I could take their picture, our guide translated, and the question from all was “why?” I told them they were so beautiful – when that was translated they laughed at me, but then except for one who was still laughing, they all put on a serious face and let me take my picture. They’re still beautiful to me. 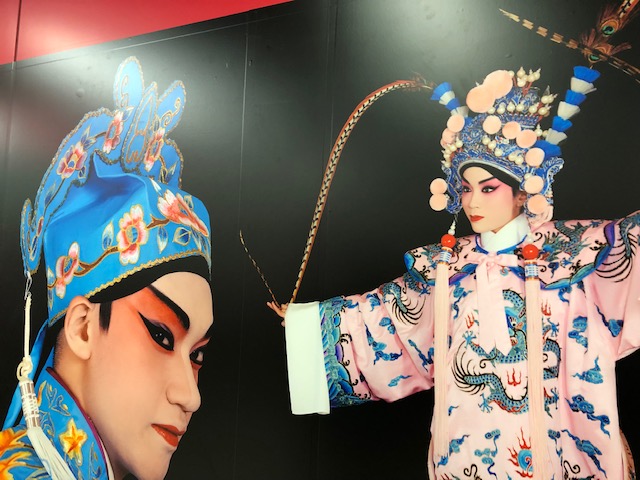 Hong Kong is a very modern city, but one with deep traditional roots. We passed this poster advertising Chinese opera every day on our way through the subway tunnel back to our hotel, and on our last night in the city, I quickly snapped this picture as we walked by, not only as a reminder of our time there but also of the deep traditions and roots that form the foundation of the city and its people. 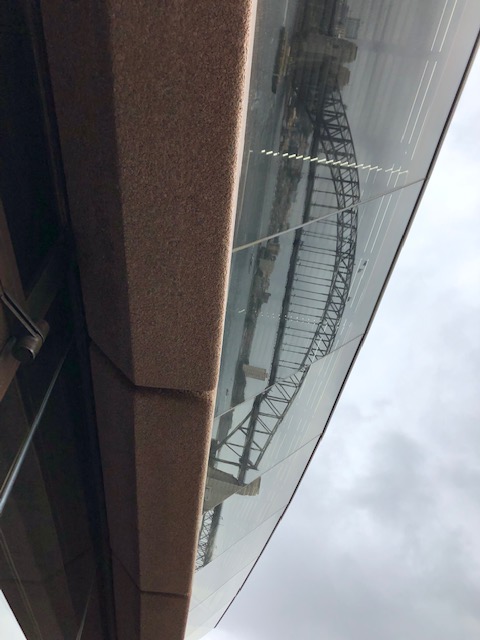 I think we saw the Opera House from every angle possible when we were in Sydney – from the water, from the Harbor Bridge, and inside and out close up during a tour we took with my brother while he was there. We had a great guide on that tour, someone who knew his subject well and how to present what could have been merely dry facts in an interesting and entertaining manner. At one point he asked us to look up, and there was the Sydney Harbor bridge mirrored in the windows of one of the theaters. A little bit later and it would have been rendered invisible by the angle of the sun. 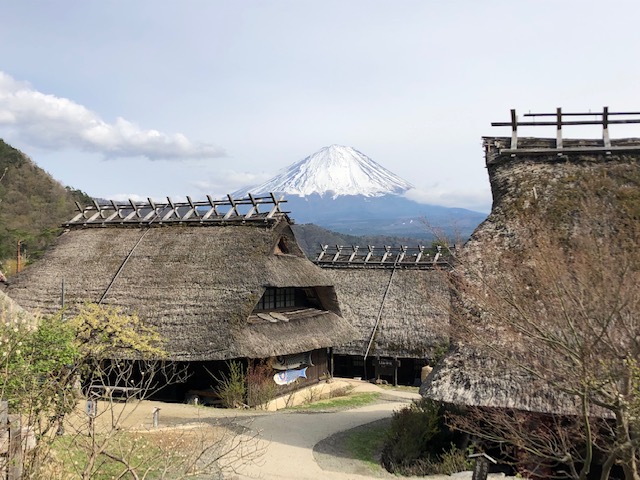 One of the outings we took with our family in Japan in 2019 was a trip to the Mt. Fuji Five Lakes area. We lucked out and had beautiful weather on our second day there, with Mt. Fuji visible the entire day. One of the last places we visited was Sato Nemba, rebuilt in 2006 on the site of the original village that had been washed away in a landslide in 1966. These days the traditional thatched buildings contain various shops and workshops, including spaces for the public to interact and practice traditional crafts. At one point, as I stopped to admire the view of the mountain, I noticed the last visitor in front of me had walked around the corner, giving me a scene that could have existed a hundred years earlier. 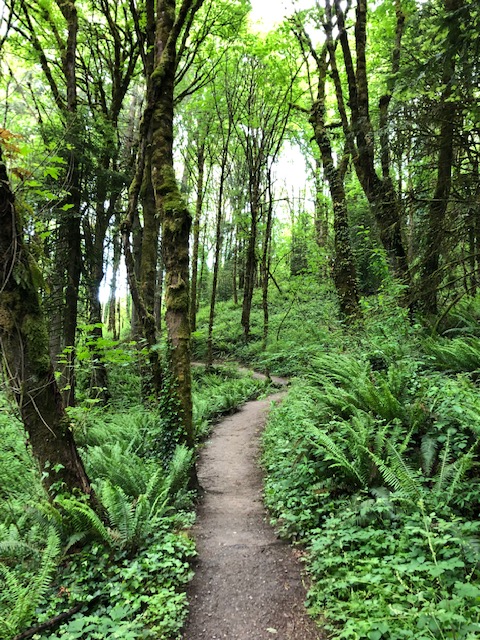 Our summer in Portland last year turned into a great stop during our travels. We had a wonderful apartment, attended Meiling’s graduation, took some lovely side trips, got together with friends, got in shape, and explored the city as tourists all summer, seeing and doing a few things we hadn’t done when we lived there. One of the things we enjoyed the most was hiking through the forest in the Marquam Nature Park, located a very short distance from our apartment. Always beautiful, we usually had the trails to ourselves, and the forest always offered a cool, quiet respite from the hot summer weather and the bustle of the city. 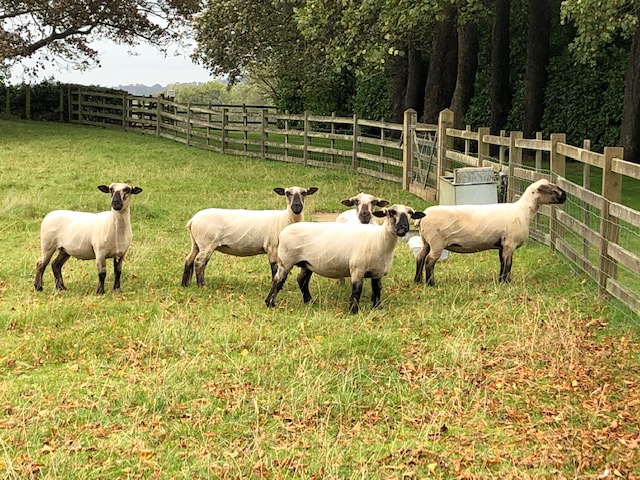 A visit to the village of Broad Campden was on our bucket list of places to visit during our stay in the Cotswolds. Located halfway between our village of Blockley and the market town of Chipping Campden, Broad Campden had a lovely collection of thatched-roof cottages as well as a well-regarded pub where we enjoyed lunch before walking over to Chipping Campden. As we left the village, this group of freshly shorn sheep, with their identical cutting patterns, stopped and posed for this perfect Cotswolds scene.

Which one of these is your favorite? I’d love to know!

30 thoughts on “Baker’s Dozen: My Personal Favorite Photos from the Big Adventure”