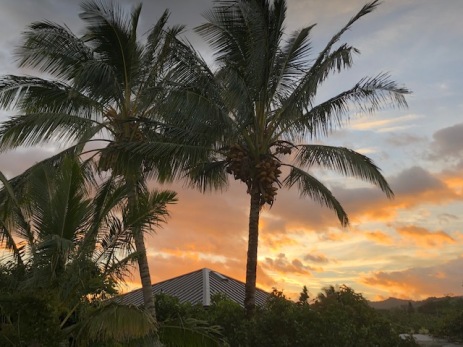 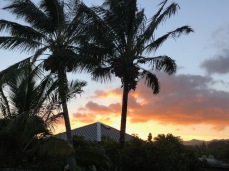 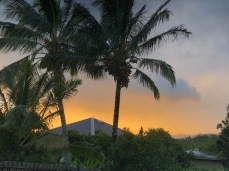 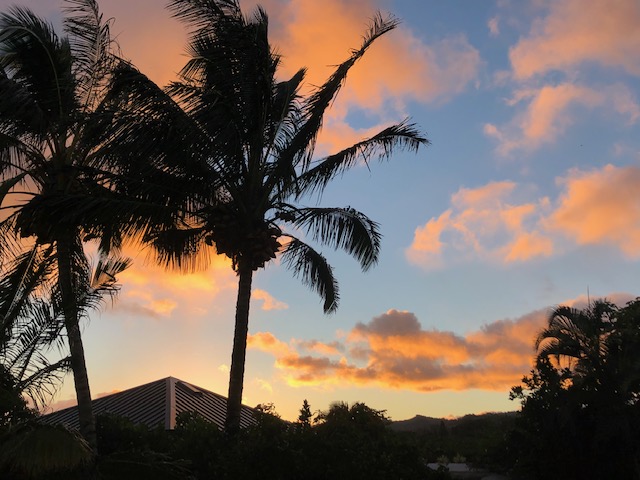 In spite of some not-so-good weather, we still got a few pretty sunsets this past week.

August has arrived, but we’re still wondering if summer will ever get here. Temperatures are still cooler than expected, it’s still plenty windy, humidity is low (yeah!), and on and on. We thought it might be warmer down here on the south side, but it’s actually been cooler and breezier than it ever was when we lived up in Kapaa. It’s to the point that visitors comment on how windy/breezy it is at our place – it’s that noticeable. To be honest though, I’m mostly enjoying the weather (so far) and know it could be a LOT worse. August, September, and October are typically the hottest and most humid months of year, especially as the trade winds die down or disappear, but I’m kind of hoping things will continue as they are (with a few beach days thrown in). It’s just been . . . different.

Speaking of August, I realized this past week that we’ve passed the four month anniversary of our return to Hawaii. It sure has seemed like we’ve been here much longer, but I think that’s because of all that we’ve accomplished in the past few months, from finding a place to live, getting it furnished, and getting ourselves resettled. Things on the island have loosened up some since we arrived and are very slowly returning to some semblance of normal, but masks are still de rigeur everywhere, many businesses and restaurants remain closed or have gone out of business, and visitors are still few and far between due to the quarantine. Things are still on edge though as cases rise, especially on Oahu (Kaua’i currently has just two active cases). We read this past week that Japan may open back up to visitors from Hawaii only, and vice versa, but cases in Tokyo are rising again as well so probably not.

YaYu received her updated financial aid information this past week, and it turned out to be much better than all of us expected. All of her aid comes from the college this year – the only federal aid she was offered were loans, both subsidized and unsubsidized, but she turned them down. Her fall term has now been paid for, and a round-trip plane ticket to and from Philadelphia has been purchased. She will leave here and fly to Honolulu, then on to Seattle where she will meet her friend and roommate from last year to fly together on to Philadelphia. She’s nervous about the flight, but otherwise excited to be going back. Only a few seats have been sold on each of the flights though, and Alaska Airlines is keeping the middle row empty on all their flights, so maintaining a good distance from others should not be a problem. We picked up extra disinfecting wipes for her to take back, and she has masks as well so hopefully will be OK on her trip back and in her room at the college. We also got her extra hand sanitizer as well, but discovered it’s not allowed on planes because of the alcohol content (it’s very flammable), so that’s the one thing she’ll have to find back there and that they hopefully will offer on the planes. YaYu is excited and happy about going back to school, even with all the restrictions put in place. She and her friends got their room assignments this week, and they will all be in the same dorm on the same floor (in single rooms). She’s very happy about that, but we’re not sure that’s such a good thing. YaYu has also been hired for two on-campus jobs this year, but thinks one may be eliminated. Her other job will be at the campus library.

I’m going to call Royal Hawaiian tomorrow morning for an update on our missing box. Every day it seems I recall or need something that was in that box: the cake stand the girls found at Goodwill and gave me for my birthday one year and the glass cover I found for it, my citrus juicer, the cake pans and pie plates, the salad spinner, the bathroom scale, and Brett’s blood pressure monitor all have been missed and mourned this past week. I thought I’d only feel badly about the wall hanging and cookbooks, but it turns out we both miss all that other stuff too – there was a reason it was kept. We know if the box went into someone else’s crate we’ll never see any of it again, but we continue to hope it was left somewhere in the storage facility and can be found. That hope diminishes day by day though. The only upside, if there is one to be found, is that right now we have no idea where we would put all that stuff as storage is already pretty full-up.

And that’s the week that was! It wasn’t the best week ever, but not the worst either by a long shot. Overall I’d say it was pretty good. I hope it was a good week for you all as well, and that you had lots of good things happen for you, good food to eat, good books to read, and that you’re staying healthy and busy during all the current madness. Here’s to the week coming up!