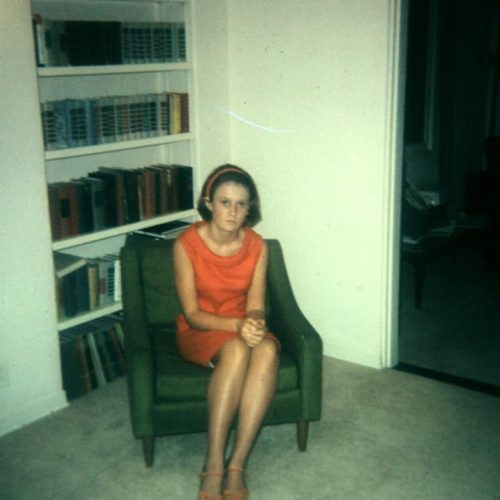 My sister sent me the above photo last week. My brother has been transferring my mom’s photos to digital files and sent this one to my sister for some reason.

A little backstory on the photo: I am 14 and in my first year of high school. I am waiting for a boy named Jim to pick me up for the semi-formal Homecoming Coronation Ball, wearing an older woman’s orange cocktail dress that my mother made me buy because she did not want to pay for a semi-formal dress. I hated the orange dress and didn’t want to go to the dance wearing it. I actually ended up getting my wish because Jim never showed up. It hurt at the time, but looking back it was a blessing in disguise. I would have been miserable, and I didn’t like Jim all that much anyway.

The first thing I noticed about the picture though was how small I was, a mere slip of a girl really. I was almost as tall as I am now, but I was so slim. You couldn’t have convinced me of that back then though because I was already convinced I was fat. I was always on a diet because the message I kept getting over and over at home was that I was overweight. It started when I was in middle school, when my older brother came up with a nickname for me, “Super Oink,” to let me know he thought I looked fat. He eventually shortened it to “Super,” but the name still hurt me deeply. My parents laughed every time I brought it up and thought it was funny and told me to “get over it;” my brother was never asked nor told to let it go (my brother still calls me Super today, like it’s some endearing connection, but I refuse now to use or respond to it). The hurt was so deep at the time that I moved over to my grandmother’s home for a few months, walking to school every day and hitching rides with friends for choir practice and church on Sunday (my grandmother didn’t drive). My father got in on the weight shaming as well from time to time. For example, during the summer after my freshman year I practically starved myself and exercised daily to lose weight because I had been selected for the school’s drill team and thought I should be thinner for that. When I went to tell my parents one morning that I had reached my goal weight, my Dad’s only comment was, “Well, your legs still look heavy,” and there was no comment or rebuttal from my mother. I remember feeling crushed. By my junior year I was attending Weight Watchers meetings even though I had trouble convincing them I needed to lose weight.

When I look at that picture of my 14-year-old self now I feel angry, sad, and disappointed, just like that young girl in the picture felt that evening. I was not overweight, even by a little, but I had already been conditioned to think I was, already seeing the “fat girl” every time I looked at my reflection and constantly comparing myself to other girls I thought were thinner. I know now they weren’t.

Why did I think I was overweight? Why was I made to feel so ashamed of how I looked? That’s what makes me angry now, not just for myself but for so many women. Who did/does that serve? What did it/does it matter? What was/is the point? Back then I was a good student, read constantly, had nice friends, and earned my own money babysitting in the neighborhood. I was healthy and active. No one outside of my family seemed to care what my weight was or how I looked, so why did my family keep it up? Because of their judgements and remarks, and also because super-skinny models like Twiggy came to be seen as desirable and attractive at about the same time, I have spent most of my life obsessing about my weight and food, always asking myself if I “look fat” in something, always thinking things would be better if I was “thin,” and constantly following one diet or another and berating myself when my weight creeped up. For what?

That early conditioning has been more potent and ingrained than I ever imagined, and has stayed with me, impossible to get rid of. It has only been in the last two decades that I began to recognize and remember what had been going on and begin to change my attitude and how I see myself. I worked hard to raise my daughters differently so that they exercise and eat well for no other reason than it is healthy. I’m losing weight now for my health as well, so my joints don’t ache. I am no longer obsessed with food and I refuse to buy a scale. I accept that I will never be model thin, but again, so what? Sadly, I still stop at a mirror whenever I pass one and check to see whether I “look fat,” and I still see a fat girl most of the time, not what Brett, my children, or others see. I’m still healing, but I’m not there yet and sometimes wonder if I will ever get there. The scars of the past are deep.