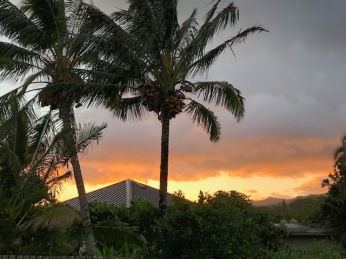 Sunsets are all about the clouds. Most of the week there were no clouds in the evening, so . . . no beautiful sunsets.

It’s been another week of wacky weather for us although we have had more sunshine than in the previous two weeks and we’ve been able to get out and walk every day, with frequent rainbows appearing from recently finished to soon-to-arrive rains. Weather-wise, we’ve dealt with everything from vortex force winds spinning through our yard, rain every night and most mornings, high humidity, and everything in between. Thursday morning I went to hang the laundry outside in the bright hot sun and before I was even halfway through getting that done a massive rainstorm passed over – it arrived so quickly I barely got everything up to the deck and under the umbrella in time to avoid getting soaked. There are many different microclimates going on all over Kaua’i and a “one-size fits all” weather report does not cover the differences depending where you live or where you are. We gratefully have a near-constant breeze here in Lawai, and get heavy winds from time to time, while we heard from our friends Alan and Cheryl up in Kapaa that the trade winds have already slowed down to almost nothing there. Whatever the weather though, it’s still paradise (for the most part).

I have never been into genealogy at all, and although I know some information about my ancestors a great deal of information about my family, both on my mom’s and dad’s side of the family has been lost as their generation has passed on. However, this past week I had the pleasure of learning not only my great-grandmother’s name, Alice Houlgate, but where she was born. I knew on a very superficial level that she had been born in England and immigrated to the U.S. in the 19th century, married a farmer and moved to Nebraska (my grandfather and two brothers were born in the sod house my great-grandparents built in Fairfield, Nebraska), but that was the extent of my knowledge – no one ever told me her name nor the name of my great-grandfather, and I never knew where she was from in England. It turns out Alice, one of nine siblings, was born in a small village in Derbyshire called Turnditch where the Houlgates had lived since the mid-18th century. Alice and her husband, and apparently many of her siblings, eventually moved to Pasadena, California – I know my grandfather was working in Pasadena when he was 14 – and I grew up hearing about the local Houlgates, and was occasionally dragged along to meet my “Houlgate relatives” (although I had no idea who they were or how we were related). Alice died two years before my mother was born and my mom was given the middle name of Alice, and one of our daughters now also has the middle name of Alice. A long-time dream of mine has been to see where my family came from in England, so I’m hoping I will be able to visit the village of Turnditch in the future and see if there are still Houlgates living there. I did find a Derbyshire walking tour that stops for the night in Belper, located less than two miles from Turnditch, so if we survive our Cotswold walking tour, maybe we’ll do that one next!

YaYu’s early morning flight over to Honolulu on Southwest was cancelled this past week and she was switched to a later flight that got her there just 10 minutes before her Alaska Airlines flight to Seattle took off! Nope. I contacted Southwest and got a credit to use later (credit is good through September of 2022), and booked her on an early morning Hawaiian airlines flight that will get her there in time to get her bags and recheck them on Alaska. The cost for the Hawaiian flight was the same as the Southwest one; however, she will now have to pay luggage fees to get her bags over to Honolulu (and also has to pay for her luggage on Alaska).

YaYu has befriended the judgmental cat that kept appearing at our door and the cat now appears like clockwork every morning to spend some time with YaYu. She (the cat) is going to be very disappointed though after YaYu leaves and when Brett and I won’t come out to sit with her and pet her. We have promised YaYu that we will keep the water bowl that she set out for the cat filled, but that’s it. SIGH again. The cat’s name is Ally, by the way – she was abandoned by a family in the neighborhood that moved away a couple of years ago, and now makes daily rounds to several houses in the neighborhood for food and affection. We’re not sure who is feeding her but she has refused food and treats from YaYu so someone is taking care of that.

The number of virus cases continue to climb on Oahu, and there were two more deaths there this past week. The number of visitors to the islands continues to climb each week as well, and YaYu read the other day that many are registering with a phony address for the quarantine (probably some locals are as well upon return) so they can get out and about. Thanks so much. So far Kaua’i continues to do OK with only a couple of virus cases here, but this past week an average of 30 visitors per flight was arriving on the island. Also, an average of 12 people per week claim they are “relocating” here, although many may be locals returned to Kaua’i from other islands. We have seen tourists out and about, usually without masks – it’s very frustrating. Thankfully the stores we shop at and the farmers’ market – the only places we go to these days – require masks and won’t let anyone in without one. It’s very frustrating to watch other countries around the world making progress while knowing how much longer it’s going to be before our country gets a handle on this pandemic. We chatted with a man the other day at the park, a life-long resident of Kaua’i, and he said we couldn’t have picked a safer place to come to when we returned to the U.S. I sure hope it stays that way because if the virus ever gets a foothold on Kaua’i we are all doomed.

And on that happy note I will close. We did have a very nice week, and got lots of things done, books read, etc. and are looking forward the coming week and hope you are as well!

YaYu wanted to spend her last day on the island at the beach and she wanted to swim . . . so we’re back at Salt Pond. Couldn’t have asked for a nicer day.
Massively BIG (and loud) rooster in our yard calling for its twin. I can’t remember seeing a bigger one on Kaua’i.
And yet another beach day! Today we’re at Salt Pond.
A second beach day in the same week? How did we get so lucky?
Beach day at Shipwreck!
Hau’oli Makahiki Hou! Wishing all a happy, prosperous, and healthy year . . . because we could sure use one after the last two!