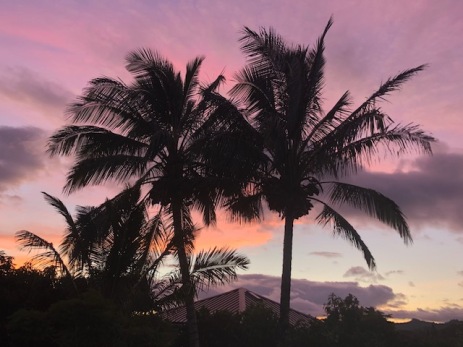 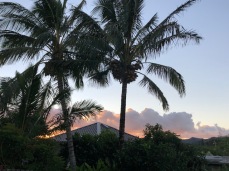 We had some pretty sunsets this past week!

Happy birthday today to our son, M (his birthday is already over now in Japan though)! He has been a delight since the moment he was born, was pretty much the world’s easiest child to raise, and we couldn’t be prouder of him if we tried for all he has accomplished both personally and professionally, as well as for being such a great husband and father. One of the very cool things he does every year is walk the Komazawa Challenge to raise funds for a charity in Japan that supports and assists children with terminal or incurable diseases and their families. He believes this year he will go over $30,000 total that he’s personally raised for the charity during the five years since he founded the walk in 2017. He usually holds the event in June, but because of Covid-19 it was postponed until September this year (the walk is next Saturday). We’re not-so-secretly hoping he’ll do the same in 2022 when we’re in Japan so we can walk with him, for at least part of the distance anyway as the total walk is near marathon length.

I have now grown sick to death of the scent of guava, something I never believed could happen. Guava have a naturally sweet, perfumed aroma that I used to love, and in the past we’d set a bowl of ripe guava out on the counter in the kitchen (we had a guava tree in the back at our old house that produced about six to ten fruit per year) and it would perfume the whole house for a short period every year – it was lovely. With the daily bags of fruit now coming off our tree, the scent in the house is ever present and getting into everything, and the aroma now is overly cloying and overly sweet. Brett took two huge bags of fruit up to Monkeypod this past week, but the ripe fruit just keeps on coming. I love the jam we made, and Monkeypod is happy to receive all of our excess fruit, but the amount the tree keeps putting out has almost been overwhelming. Even the birds seem to have had enough.

Brett received a notice this week that beginning January 1 he will be charged $25/month for our Tricare Standard insurance, the same insurance that was guaranteed to be free for life when Brett enlisted in the navy in 1970 as well as when he retired in 1992. We have to have a Tricare Standard policy to cover YaYu until she graduates in 2022, but thankfully our separate Tricare for Life insurance remains no cost, for now anyway, but we expect that will soon change as well. While it’s frustrating to see our benefits erode, the $300 dollars/year will be thankfully much, much less than Bryn Mawr’s mandatory health insurance cost. This year was the first where students could opt out of that insurance if they could show proof that their personal insurance was as good or better than what the college offered. Health insurance in this country is a flat-out mess, and I am hoping in the next few years that something similar to our military plan will be made available for everyone. Having lived with “government insurance” for over forty years, I can attest that it works well and beats anything else currently out there. 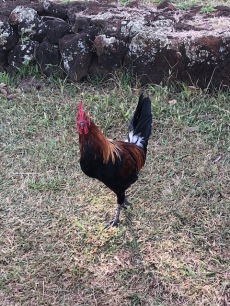 Chatterbox walking over to say hello

Mr. Beautiful heading around our car

None of these guys wanted their picture taken – they never stopped moving!

It would be easy for us to take chickens for granted here on Kaua’i, and most of the time we do, but others times some will surprise and amuse us. We’ve been walking long enough up at Kukuiula Park now that we can recognize different roosters and chickens and have gotten to a point that we look for the ones we know. We’ve also started to give some of them names (perhaps an early sign of insanity?). One of our favorites these days is a rooster we’ve named Chatterbox, that will occasionally walk along the path with us for a while, singing/chatting the entire way, or if he doesn’t walk with us, will just come over and greet us and chatter a bit as we walk past. Another rooster we always look for is General Custer, named for the blonde feathers that cascade down his neck and gold feathers on the back of his body. Both Chatterbox and the General are wild jungle fowl and they hang out up in the park. The most stunning rooster I have ever seen though is one we’ve spotted in the parking lot at the bottom entrance to the park. We’ve named him Mr. Beautiful because he is simply gorgeous (and he knows it). He is large, and perfectly proportioned from the comb on his head to the tip of his beautiful brown tail feathers. His other feathers are in blocks of tan, rust, burgundy, and gold and are beautifully glossy – he’s just something else to look at. We don’t get to see him very often, but when we do he always has large harem milling around him. Several of the other regular walkers feed the chickens in the park from time to time with stale bread, but we haven’t gone that far yet (mainly because we never have leftover bread), but that doesn’t keep most of the chickens from running up to us almost daily to make sure.

The most hellish part of our daily walk are these two sections where the sun beats down and the breeze/wind stops. Thankfully they don’t take too long to get through, but we do each of them three times and dread them.

I seem to be entering another one of my biannual rounds of insomnia, but in a somewhat different way. This past week I have been waking up early, very early sometimes. In the past my insomnia caused an inability to fall asleep at night, but with all the walking we’re doing now I’m not having any trouble with that – these days I put my head on the pillow and I am out like a light, and I sleep deeply through the night. However, waking up at 6:00 in the morning like I have on a few mornings is definitely weird (and annoying). I wear earplugs and a sleep mask at night so I know it’s not the light coming through the windows in the morning nor noise from the birds or wind that’s waking me, so am not sure what’s going on. Hopefully this is something temporary because I dislike feeling sleepy in the afternoons, especially right before it’s time to head out for our daily walk.

Also, the past couple of weeks I’ve been able to comment on a couple of Blogger-platformed blogs using my phone, but with others comments from my still vanish into the Internet ether. I still have no idea why that is or how to fix it, but I keep trying!

What a year this week has been! Actually, we’ve personally had another good week, but it’s been a strange and sad one in other ways. Hopefully it was a positive week for all of you, and you had several good things happen for you. I glad we got through it, and I’m looking forward for all of us to the week coming up!

Little Guy brought some friends along to Mexico!
Long travel day yesterday, with our scheduled 6:00 p.m. arrival finally getting into Toronto at 10:20 p.m. We finally cleared immigration and got into our gorgeous hotel room last night just before 1:00 a.m., got two hours sleep and a hot shower, then back over to the airport at 4:00 a.m. to recheck Brett’s bag (mine had been checked through to Mexico City) and beat the crowds at security for an 8:30 a.m. departure.
Can’t leave Philly without having a cheesesteak (with Cheese Whiz). It was DELICIOUS!!!
She did it! Bryn Mawr Commencement 2022!
YaYu rings the Taylor Bell at Bryn Mawr to announce she has finished all her coursework and is ready for graduation!
Aloha oe, Kaua’i. Mahalo nui loa . . . for everything.