While I am rested and ready to get back to writing, I’m sure not very tan (and this week’s weather sure didn’t help either). I’ve gotten used to being asked if I’m enjoying my visit whenever I wear shorts as my legs are pale enough that they glow. But, I feel rested again and ready to move forward. I had very a pleasant week off and thought a lot about what I wanted to write and when. I’ve decided that for the time being I’ll continue to write on travel topics now and then, and about all the other things in the blog header (plans, goals, Kaua’i, and so forth). The posting schedule I’ve been using works well for me right now as well, so I’m going to stay with the Sunday Morning posts, have something else up on Tuesdays or Wednesdays, and recipes on Fridays for the time being. The response to the recipes has frankly been a pleasant surprise as they’re simply ones our family has enjoyed over the years, ones I’ve collected from all sorts of places. I’m feeling grateful that I put almost all of them online several years ago because my cookbooks were in the box that was lost in the move.

Our baby girl is home, but once again her journey nearly turned into a logistical nightmare. Sometime last week Alaska changed her schedule, and had her flying from Philadelphia to Chicago on American Airlines for the first leg of her flight versus the non-stop we had booked into Seattle. Their email informing her of the change went to her spam filter for some reason and she didn’t see it until Friday. The new Alaska flight out of Chicago had her arriving later into Seattle than the original reservation, so her flight into Honolulu had been changed to one that didn’t arrive there until 9:00 p.m., long after the final connecting flight of the day to Lihue on any airline had departed – she would have had to spend the night in the Honolulu airport! I got on the phone with Alaska, explained the situation, and they quickly changed her to a non-stop flight to Lihue from Seattle at no extra charge. However, that left us with the Honolulu to Lihue Southwest ticket that we had booked for her back when Hawaiian changed their schedule, but I was surprisingly able to cancel that ticket for a full refund right at their website with a click of a button – so easy. Hopefully YaYu didn’t catch the virus from the huge crowds that were at the Philadelphia and Chicago airports, but we will be practicing social distancing and mask wearing here at home for the next few days just in case. She wore both a mask and face shield during her travels, and was very conscientious about wiping things down and cleaning her hands so we hope all will be OK.

almost to the Pineapple Dump

heading north from the Pineapple Dump

The view north from the Pineapple Dump

The view south to Lihue and Hau’upa

It’s been another week of wacky weather, running the gamut from sunny and hot to rainy, cold, and damp. The ceiling fans haven’t been on all week, and on most evenings it has been cold enough to put on a sweater (it gets downright chilly here when temps drop into the low 70s, and frigid in the upper 60s). It rained all day Wednesday, too much to even try to get to the farmers’ market; but on Thursday we walked one lap before the rain arrived and soaked us. We thought Friday was going to be a bust as well, but the rain stopped long enough in the late afternoon for us to walk a couple of miles. Yesterday we woke up to heavy rains and gale-force winds again with gusts above 20 mph all day, there were torrential rains falling horizontally at times. We caught a break in the late afternoon though and were able to get in an hour’s walk, although we had to skip the trail through the woods because of the mud. However, last Monday was lovely – warm, sunny, and with a nice breeze. We were up in Kapaa for my haircut and decided to walk out to the Pineapple Dump, and ended up going beyond it to check out Donkey Beach. On the way back though the breeze stopped, the sun was beating down on us, and shortly before we got to the car I started feeling strange: my legs felt like they were made from jelly, I started having cramps in my chest and abdomen, and I began feeling very dizzy and foggy. I had apparently become dehydrated and was also suffering from low blood sugar as I hadn’t eaten or drank anything in a few hours, and combined with the heat I got pushed fairly close to heat exhaustion. Once in the car I finished the entire contents of our water bottle, Brett got the A/C in the car turned on me, and by the time we got home I felt fine again. It was a scary experience though, and I won’t walk that distance again, especially when it’s hot, without taking water breaks along the way and making sure I bring along a snack. Lesson learned! 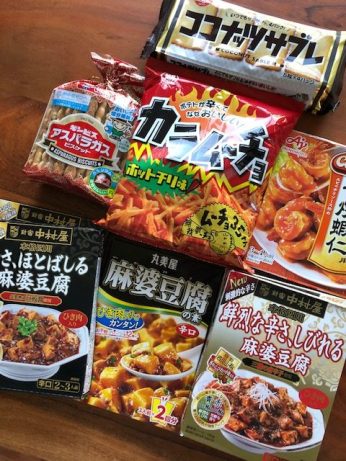 Spicy foods for YaYu, cookies for Brett and me

A big surprise this week was the arrival of the box our son and daughter-in-law sent to use back in July. I sort of jokingly guessed when they sent it that the earliest we could expect it to arrive would be Halloween, so that ended up being not too far off. Packages into the U.S. from Japan can only be sent by surface mail right now (i.e. a slow boat) and then have to clear customs, creating a long, long delay. The package contained 10 packages of mugicha tea bags, which will hopefully last until we get back to Japan and can get more, as well as several spicy sauce mixes and some spicy chips for YaYu, and three packages of Japanese cookies for us, including our favorite asparagus biscuits (not made from asparagus, just shaped like spears of asparagus).

Sunday’s rainbow was a spectacular full arch. I should have taken a panoramic shot – it was huge, and especially bright.

Thanksgiving has always been my favorite holiday – no presents, no expectations (at least not in our family), just good food and being together and thankful for all we have and have been blessed with. This year it will just be the three of us, and our meal will be very untraditional, but that’s the way things seem to be going this year. We’re planning on sleeping in on Thursday, and will take a walk out to the Pineapple Dump if weather permits, a tradition we started when we lived here before. In the evening we’ll have our annual holiday viewing of The Descendants (last year we watched it early when we were in Edinburgh). Sometime during the day we’ll have a chat with Meiling and WenYu, and maybe will get to talk with our son and family, although the time difference is always an issue and it doesn’t sometime happen. No matter what, it should be a lovely day.

And that was the week that was (mostly)! It was a very nice one too, and I’m looking forward to our simple Thanksgiving and the rest of the week coming up, and hope you are too!