YaYu heads back to school tomorrow evening, and we’re saying goodbye with mixed feelings. We’re ready to have our little apartment back to ourselves again and not have YaYu’s stuff all over the place (it’s really too small for three people), but also know we will greatly miss her and that it will many months before we see her again. This long, extended stay with us has not been easy for her and she’s pretty much been bored out of her mind for most of it, but she has also hasn’t seemed as prickly as she’s been in the past. I am looking forward to not having to cook so much so often, and pick up after her so often as well. Anyway, she’ll fly from here to Honolulu tomorrow evening where she has a couple of hours layover, then on to Seattle overnight to meet up with a good friend in the morning before heading back to Pennsylvania together. They’ll share an Uber ride out to the campus, and classes will begin toward the end of the week. YaYu has a heavy schedule, and a lot to decide this term – she’ll be hunting down a research internship and researching graduate programs. She has a few options if she does not nail down the internship, but she definitely won’t be coming back to Hawaii – once again there won’t be anything for her to do here.

Brett had to begin quarantining the minute he came back from Honolulu, and that doesn’t end until Thursday evening at 5:00 p.m. YaYu has been freaked out about him possibly having brought the virus back with him so he has been wearing a mask inside and even out in the yard (and she wears a mask inside), she’s been eating separately from him, and he has not been allowed to touch the dishes (washing, putting away, etc.) or anything she uses. He still makes the coffee in the morning, but that been OK with YaYu because she doesn’t drink coffee. Brett has spent most of his time reading, but he has been taking care of various tasks around the apartment so our windows now sparkle, light fixtures are spotless and bug free, everything is dusted, the refrigerator has been scrubbed out from top to bottom, and so forth. His appointment with the doctor in Honolulu went well, and he’ll have one more test done here before surgery, which will thankfully also be done at the hospital here. He’s not sure whether he’ll have to go back to Honolulu for a post-op exam or whether that can be done via tele-med, but if he does have to go we’ve decided I will tag along as well and we’ll give ourselves a little break there. We’ll see.

We’ve had another week of crazy weather with rain, wind, thunderstorms, and unusually cold temperatures. We had a few days where temps dropped down into the mid-50s to low-60s in the morning and at night, and stayed in the upper 60s during the day – it was uncomfortable. Friends on the mainland have laughed and reminded me that they haven’t had temperatures in the 60s for weeks now, but we don’t have insulation or heaters here, so if it’s in the 50s or 60s outside it’s also 50 or 60 degrees inside as well and all we can do is bundle up and hope it eventually warms up (we would have turned on the heat back on the mainland if it was this cold inside). It’s sort of like a reverse heat wave for us when it gets this cold here, the opposite of a few days of weather at 107° or so with no air conditioning, no ceiling fans, no breeze, and insulation made to keep the cold out. Anyway, things finally appear to be moving back to normal – the temperature is noticeably warmer this morning.

Hawaii’s current visitor quarantine requirements are due to expire on February 20, but we heard rumors this past week that they may continue until more people/visitors have been vaccinated, especially with the relief bill coming with continued unemployment insurance, etc. Cases of the virus here have been dropping rapidly, but Hawaii is currently not getting enough of the vaccine, and what’s coming now is being used for the second dose of those who have been vaccinated instead of getting new people taken care of. Hopefully that will change soon. Everyone we talk to here admits to loving quiet and calm we’re enjoying now, the lack of traffic on the roads, etc. and is not looking forward to having hoards of visitors descend on the island once again once things improve. Hopefully some lessons have been learned, and tourism won’t reach the levels it was at back when we left in 2018 – it was overwhelming back then, and unsustainable. I am sorry though for all the businesses that weren’t able to make it without tourist dollars and won’t be coming back – peace and quiet has come with a price. 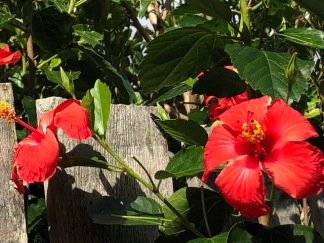 Hibiscus spilling over the fence 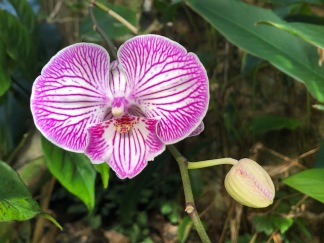 Don’t know what these are, but I love them.

Even with the cold, there’s been lots going on in the yard this past week.

It’s been another quiet, low key (and cold) week but a good one and I’m looking forward to the week coming up and hope everyone is as well. Hopefully there will be more and better picture-taking opportunities. In the meantime, here’s to good food, good books, safe travels, frugal living, and good things happening for all!