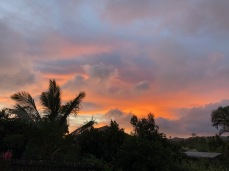 Red sky at night, sailor’s delight. We got quite a show on Friday evening as an all-day storm finished up and blew away.

It’s been a somewhat tumultuous week. Last Sunday evening Meiling called us in tears to say she and her boyfriend had broken up. We talked with her for a long time, until we were sure she would be OK and that she would be able to move ahead. She is going to, as she says for now, spend time nurturing her relationship with herself. We are of course sad because we all thought her boyfriend was “the one.” They had been together for several years, but being cooped up together for the past year in a small apartment brought out things in both of them that they might have not discovered until much later, when things would have been far more complicated to get out of or fix. She went up to Massachusetts this weekend and is now staying with WenYu and her partner but is making appointments to view apartments in Boston next week and will relocate there as soon as it’s possible. We were very relieved to hear that she will be continuing with her current employer and working remotely. She loves her job, they love her, and she makes a very good income and has great benefits. She amassed an impressive amount in her savings account over the past year, so has a good cushion for her move and settling in.

Many, many thanks to so many for the support and many suggestions I received following this past week’s Facing Reality post. It was very helpful to read others’ experiences and ideas, and gave us a lot more to think about, something we are thankful to have time to do. We are not leaving Hawaii any time soon, or at all if we can work things out here – we love our life here and it’s a good fit in so many ways for us. Plus, the thought of organizing another big move is overwhelming, and we’ve barely gotten ourselves settled again. It was an expensive operation too and we’d like to enjoy it for a while. However, the desire to be nearer to our children is a strong pull, and the housing situation here is discouraging, so for now we will keep investigating and saving and see where we end up. Our kids want us to stay here for now as it gives them all a reason to travel to Hawaii! Early 2023 is our target for making a firm decision on whether to stay or relocate, so we’re going to take our time and get it right.

From the No Good Deed Goes Unpunished files, Hawaii is still moving slowly with getting its population vaccinated, with only essential workers and those over 75 still eligible to get the shots, and new shipments of the vaccine going for second doses to those populations. When the vaccine first came out, Hawaii’s allotment was slashed nearly in half because of its successful efforts in keeping COVID levels down (“you don’t need so much”), with vaccines instead going to states who were experiencing excessive outbreaks (because of poor management decisions). Our tier (65 and above) is up next though and we’re hopefully things will start moving in the next couple of weeks. Brett and I are beyond ready to receive our jabs! 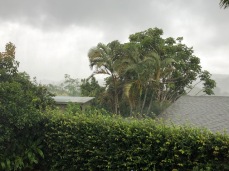 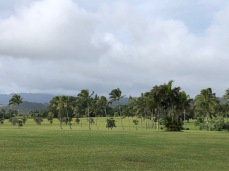 Not the weather we had hoped for this week.

When we see what the weather has been doing in other parts of the country we know we honestly have nothing to complain about, but the weather here has been nuts this past week, from the sublime (last Sunday) to the ridiculous (Friday) and everything in between. Spring has always had the potential to get pretty wild on the island (like the rain and flooding back in April of 2018), but we know things will eventually settle down and sunny, warm days will be back. I’ve been nursing a sinus headache most of this past week thanks to the weather, and am looking forward to that getting resolved. Brett’s sister and BIL live in Dallas, and had no power for a week but we just heard from them and they’re OK, thank goodness. There are just no words for what’s been happening in the Midwest and Texas, and suffering that’s occurred and the reasons for that.

Anyway, here’s looking forward to a better week coming up for all, no matter where you live or what’s been going on!

Water, water everywhere.
Downtown for the Nashville Symphony “Home Alone” concert, but this nearby spot caught my eye - love me some Johnny Cash!! The GooGoo Cluster store is right across the street!
Liking this winter tree a bit more!
Winter is coming . . .
December 1 and things are already starting to get out of hand.
Some pine cones and sparkly balls: how difficult could it be? It took five tries before I could stop all the balls from disappearing under the cones!
Join 1,110 other followers