Both Brett and I thought by now we’d be well into sweater weather, but at the beginning of this week temperatures here in Strasbourg were in the mid 70s, and accompanied by beautiful blue skies.

We had put off visiting museums thinking we’d save that for a rainy day, but there haven’t been any rainy days, and with time growing short before our departure this weekend we decided on Monday to walk up to the Musée Alsace, just up the street. The museum, located in a what turned out to be an actual vintage Alsatian home, gave an fascinating overview of traditional life in the region. The artifacts were interesting (and beautifully displayed) and included exhibits about clothing, furniture, work, daily life and religion. Our favorite exhibits included the many examples of tiled or ceramic wood stoves that were used to heat Alsatian homes back in the day, as well as traditional furniture, pottery and clothing. We especially enjoyed the exhibit of carved flour spouts from old mills in the area, with their expressive faces. 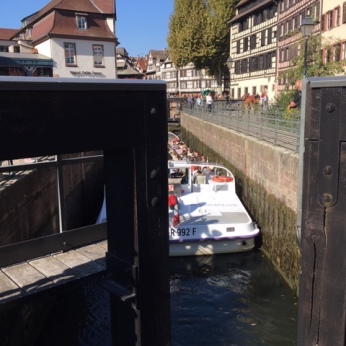 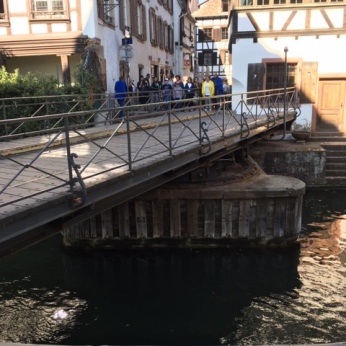 Afterwards, we stopped for a pastry and coffee at our favorite boulangerie before heading back into the Petite France neighborhood to check out a walkway out over the river we had missed before. The walkway turned out to be alongside a lock used to raise boats over a drop in the river; the swiftly running waterfalls on the other side of the river had formerly been used to operate mills. We were fortunate enough to be there in time to watch a tour boat enter the lock, be raised up and then head out, all in a little over five minutes. We were also able to watch an old swing bridge we had crossed previously in operation – it had to be moved so the tour boat could continue through.

That evening we had the great pleasure of having dinner with our Airbnb host and her family, who live in the countryside outside of Strasbourg. She prepared a very French meal of mashed potatoes, duck confit, and shallots cooked in wine and cassis. We drank Alsace sparkling wine before dinner, and some red wine with, and after the main course we tried five different cheeses including a chèvre with figs, a brie stuffed with truffles, some roquefort and two other delicious options. Finally, we were served a slice of tart – mine was Mirabelle plum, and Brett’s was blueberry. The family spoke excellent English so the conversation flowed all evening, and we left with our hearts and stomachs full and happy.

Yesterday Brett and I decided to ride the tram over the Rhine River into Germany, but after checking the map we discovered that nothing we wanted to visit there was walkable from the station. We debated just going over and getting on the next train back so we could say we’d been in Germany, but finally decided to skip that outing and head over to see the Cathédrale again, visit a nearby museum of Medieval and Renaissance art and artifacts, and stop for ice cream on the way at a shop our host had recommended.

There was a wonderful family musical group from Latin America performing in front of the cathedral, so we listened to them while we ate our ice cream, spent some time examining the carvings on the cathedral, and then walked over to the museum, which turned out to be closed because of a strike. Undeterred, we headed back the other way in order to wander through some of the narrow streets around the cathedral and make our way over to look at Temple Neuf, a Lutheran church built between 1874 and 1877, on the site of an old Dominican convent. The church was closed though and we were not able to go inside.

At one point we headed down an alley to get back out to the main street and happily discovered a lovely work of street art on a wall in the alley. When we got to the main street we found ourselves up against a large demonstration in progress, with lots of marchers along with some fun, peppy music. We had seen notices at the tram station on Monday about a strike, but had assumed it was a rail strike, not the temporary shut down of service while the demonstration passed through. We realized that if we had gone to Germany we most likely would have been stuck there for a couple of hours until the trams were running again, so were glad we had decided not to go.

On both days as we walked down the narrow streets we discovered shops selling traditional Alsatian specialities. We bought some delicious local gingerbread the first day as well as some Alsatian butter cookies and macarons, but just ogled the expensive artisan nougat (it cost around $36/pound) and some other bakery treats we saw. Yesterday we stopped in a wonderful fromangerie just to look over all the varieties (there are more types of cheese in France that there are days of the year), and ended up buying some more of the chèvre with fig, and a piece of lovely, soft cheese made from cow’s milk. We wanted to buy a LOT more but we restrained ourselves – it all looked (and smelled) so good. We also checked out the location of the charcuterie where we will be going for lunch tomorrow, to enjoy choucroute, a traditional Alsatian pork and cabbage dish.

We have just three more days remaining in Strasbourg, a city we have come to love. One of those will be taken up with laundry and packing, and tomorrow we’ll go out for choucroute and hopefully get in to see the museum that was closed on Tuesday. Today’s weather was overcast and cool, and the warmer weather that had been forecast did not appear so we stayed inside and rested, caught up on our reading, and enjoyed the delicious cheese we bought yesterday. It’s supposed to be raining when we get to Bordeaux on Sunday but we’ll deal with that when we get there.

P.S. I found our beeswax wraps today! They were smashed into the bottom of my backpack under a couple of things I hadn’t yet needed to unpack. So, so happy we did not leave them somewhere.

Hippie bagels for Father’s Day brunch at Little Fish Coffee in Poipu. The bird was on our case from the moment we sat down.
Pretty day at the beach, hot but there’s a lovely breeze so it’s all good. I could happily stay here all day.
Big sunset action tonight!
There was a BIG monk seal out in that water today, swimming with everyone and trying to get up on the beach to rest. It swam about 3 feet in front of me at one point 👀 - scary but also exciting! It eventually found a safe spot to get out and all ended well.
Monday sunrise
Great day for a hike on the east side beach path, from Kealia to the Donkey Beach overlook, with a stop at the Pineapple Dump on the way back (my favorite view).